‘’Only people from outside the area would complain if they can’t park. The toads live here don’t they so it’s their right of way?’’ 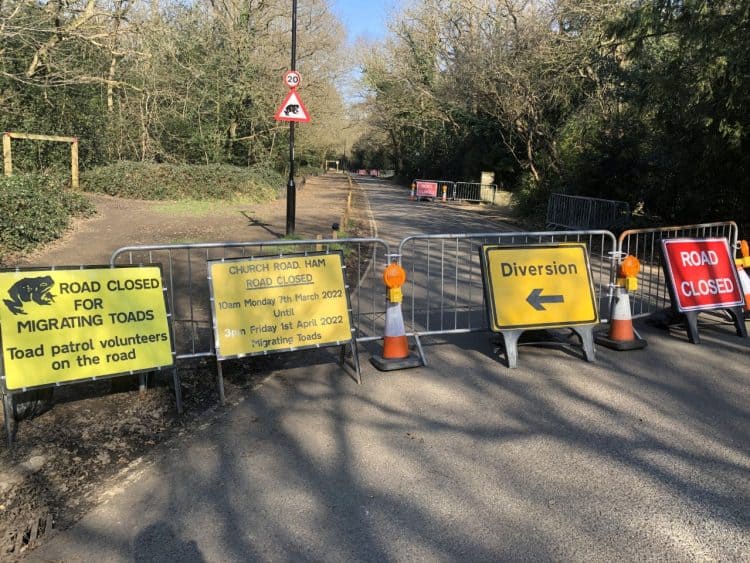 A stretch of road in London has been closed to traffic for more than three weeks to allow TOADS to cross in safety to ponds where they breed.

A 400 metre section of Church Road in Ham, near Richmond, south west London, is blocked to motorists until the start of April so the creatures don’t get squished on their annual migration.

‘Toad patrol’ volunteers man the road, which meanders through a leafy stretch of Richmond Park, at night but the road remains blocked off all day.

Few locals appear to have seen any toads or many volunteers but this did not stop them heaping praise on the ‘very British’ idea locals say can be found ‘only in England’.

Charity Froglife, which is responsible for recruiting volunteers, says the road, which is one of many across Britain that take part in the eco-conscious project, is among just a handful that remain completely blocked off to traffic.

The closure began on March 7, and is due to remain in place until April 1.

A council road traffic order has been issued to block the road.

Part of it reads: “The road closure is intended to allow the toads to cross the carriageway unharmed and to eliminate the risk of accidents if drivers were to be distracted by the presence of these creatures in their path.”

Richmond Council began sealing off the street in 2010 after worried locals wrote to council bosses to warn the creatures were being killed on their annual migration from hibernation to ponds where they breed.

It has become a source of amusement among locals.

They say it is not too disruptive as the road is normally quiet, has few houses along it and the diversion is not painfully long.

But an earnest sign warning drivers ‘road closed for migrating toads – toad patrol volunteers on the road’ has not stopped passers-by poking fun at it.

A steady stream of walkers stopped and took pictures to share with friends or made intrigued comments about the patrol.

Retired IT manager Robert Brown, 67, who lives in Richmond said: ‘’I think it is fantastic.

“To have that amount of consideration for toads I think is incredible.

‘’I have never actually seen any toads and only once saw someone we thought might be a volunteer but I think it is great.

‘’When I first heard about it I thought it was fantastic. It is quintessentially English.”

Retired customer services advisor Dorris Watt, 64, from Ham said: ‘’I think it is a good idea to protect the toads. This is not a road you desperately need to drive down and it has gone on without causing any complaints.

‘’Only people from outside the area would complain if they can’t park. The toads live here don’t they so it’s their right of way?’’

Retired accountant Chris Cann, 67, from Twickenham said: ‘’It is cute. Only in England would you close a road for toads to cross.

‘’I have never seen the toads but I have seen the volunteers. We have only seen them once or twice.

‘’For us it is no big deal as we just go down another road if we wish to park.’’

Marketing consultant Liz Workman, 62, from Chiswick said: ‘’I am all for it, I think it is a very good idea.

‘’The road is not an essential road. We have to look after our world and our wildlife. Good on them.

‘’We are in England, luckily we can afford to think of such things. We are lucky enough to be in a first world country where we can worry about toads.’’

IT worker Scott Harris, 47, from Kingston, who saw the sign for the first time said: ‘’It is quite cool. I am surprised there are not more ‘not in my back yard’ types but the road is not a bad one to close.

‘’It is a really nice idea and great for schools as children can help the volunteers. I would not want to take my kids along there and see lots of dead toads on the road.

‘’I just took a photograph of the sign as it is quite funny and I am going to share it with my friends.’’

Retired computer programmer Terry Newman, 63, from Richmond said: ‘’It (the sign) is one of the first things I ever posted on Facebook.

‘’We have ever actually seen a toad there but we think it is brilliant. I love nature and it is a great idea.

‘’We went looking for a toad once but did not find one or see any volunteers.’’

Cathy and Christie, 67 and 66, did not have much time to stop but said: ‘’It is no bother, only in England would you see it. We like that it is eccentric.’’