"Those boys have done a brilliant job and we heal together as a team now and we are there for them."

by PA
in Football, Sport 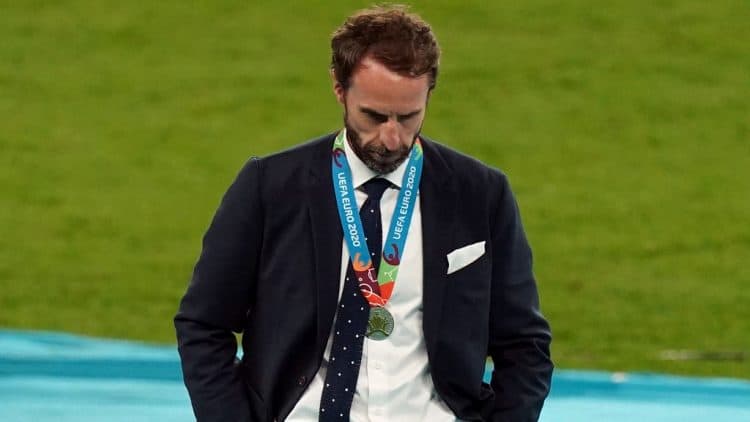 England boss Gareth Southgate says he feels like his “stomach has been ripped out” following the Euro 2020 final defeat to Italy.

The Three Lions were a penalty shoot-out away from ending 55 years of hurt, but came unstuck from 12 yards against the Azzurri after the contest had ended 1-1 after 120 minutes at Wembley.

It was a sad end to an impressive tournament for Southgate’s side, who have connected with the nation because of their spirit and commitment.

That has led to some accusations that they are too nice to win tournaments, especially coming up against the likes of Italy, who are regarded by some as kings of the dark arts.

Southgate, who says the squad will “heal together”, refutes that claim.

“It’s not ultimately where we want to get to and when you are so close that’s even more painful, of course, it feels like my stomach has been ripped out this morning,” Southgate said on Monday.

“I’ve still got huge belief in them. Those boys have done a brilliant job and we heal together as a team now and we are there for them. I know that 99 per cent of the public will be as well because they know how well they have played.

“You’re not a nice team to get to a final. We’ve overcome a lot of hurdles that we’ve not been able to in the past.

“We know that a lot of players that are still very inexperienced in terms of international football and have delivered at an incredibly high level.

“The more experienced players in the big matches were really able to use that experience to defeat Germany, who had an incredibly experienced team, to come through a semi-final that was a hugely challenging experience for them.

“And we’ve taken Italy, who are a top, top team, and unbeaten in 30 (games), right to the wire. If we’d been torn apart, or looked a mess, then I might be thinking differently about it.

“Of course we’re going to analyse everything but we’re going to be realistic about that and not just dive into things that aren’t reality and aren’t the reasons for not having won.

“It’s easy to throw theories around at the end of any game in any number of area, but I think it’s important to reflect carefully and analyse carefully when you’re the coach, because I don’t want to go along with narratives that probably aren’t correct, but also I have to reflect on everything that’s asked, which is fair.”

England made a dream start as Luke Shaw scored the fastest ever goal in a European Championship, after just one minute and 57 seconds, but they could not build on that platform and Italy came back into it as Leonardo Bonucci levelled midway through the second half.

They held on until extra-time, where their younger legs began to force Italy back, but a lack of chances ensured the contest went to penalties.

Asked what he might have done differently, Southgate said: “I think we picked a team because of a tactical problem that Italy pose and areas of the pitch we need to get pressure on them and where we thought we could hurt them.

“The first 45 minutes everybody would agree that worked. We didn’t keep the ball well enough for a 15-20 minute period and we know that with midfield players of the quality of (Marcco) Verratti, Jorginho, that’s always going to be a strength with Italy.

“And we didn’t quite create the chances that we would’ve liked to but you’re against a team who are incredible in terms of the defensive power, as a team, not just the two centre-backs.

“There are lots of things that I will reflect on, of course, we do that after every game. That is the right process to go through, but until you watch the game in absolute detail then I wouldn’t be giving you a fully accurate appraisal of that.”