Right now there are no openly gay or bisexual players in the Premier League. 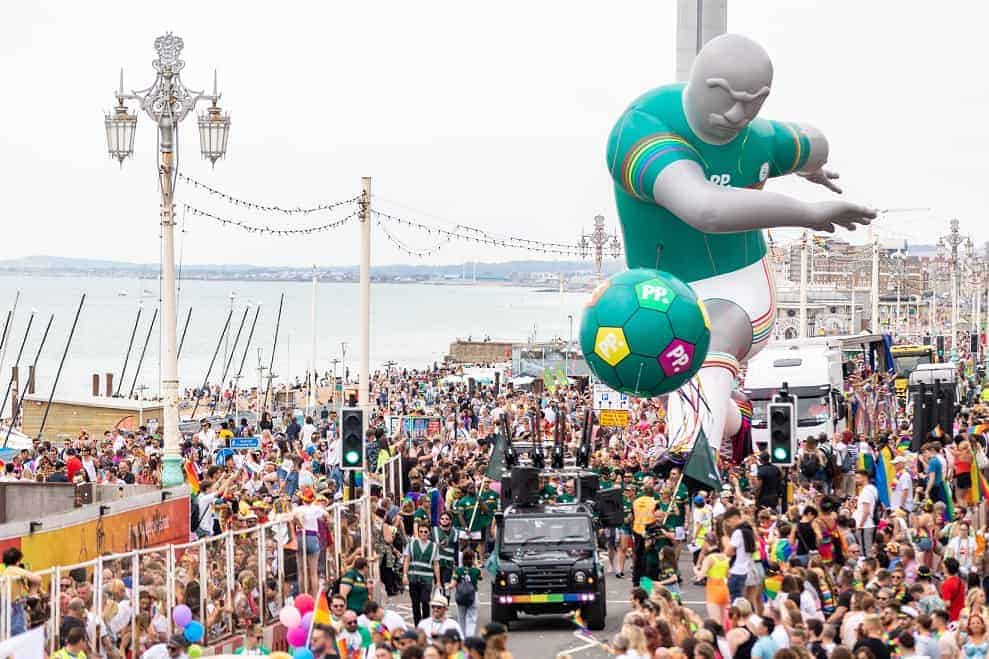 A giant inflatable football player looming higher than a two-story house was paraded at Brighton Pride this weekend to call to attention the lack of LGBTQ players in the Premier League.

Taking two hours to inflate and requiring enough helium to fill 7,000 balloons the gigantic Game Changer balloon took to the skies as tens of thousands of people convened on the south coast.

It is the largest inflatable ever used at a pride parade in the UK standing at 7 meters tall and 14 meters long.

Graeme Souness and Proud United – a team made up of LGBTQ footballers from across the nation – walked in the shadow of the colossal balloon.

The Liverpool legend and football pundit took up the role as the symbolic ‘boss’ of the team which aims to draw attention the lack of visibility for LGBTQ players.

Right now there are no openly gay or bisexual players in the Premier League.

But Souness has joined as an ally for those who are already actively changing the game in the non-professional ranks, fronting the float in association with Paddy Power whose Come Out and Play campaign is now in its second year.

Speaking at the event he revealed: “Society has made such giant strides generally in terms of LGBTQ, that as football people we’ve got to ask why does the issue of homophobia persist within our community and the professional game and challenge that.

“I’m here today as an ally and to bring attention to members of the LGBT community in the amateur game who are leading the charge in that conversation.”

European Cup hero Souness is no stranger to championing diversity in football, having signed first black player (Mark Walters, 1987) to play for Rangers and the first Catholic (Mo Johnston) to the club exactly 20 years ago almost to the day.

A spokesperson for Paddy Power said: “Back in the late 1980’s Graeme Souness was at the height of his Rangers revolution and ‘I Should Be So Lucky’, by Kylie Minogue was No.1 in the charts.

“Now for the first time ever, those two powerful forces – a singer from Down Under, and a one-time underdog – are both at Brighton Pride to celebrate and support the LGBTQ community in their own respective way.

“Thankfully Souness isn’t the one sporting the gold hotpants!”