The sports presenters were discussing reports emerging of racial monkey gestures that appear to be from a Manchester City fan to Manchester United’s Fred and Jesse Lingard during Saturday’s Manchester derby at the Etihad Stadium. 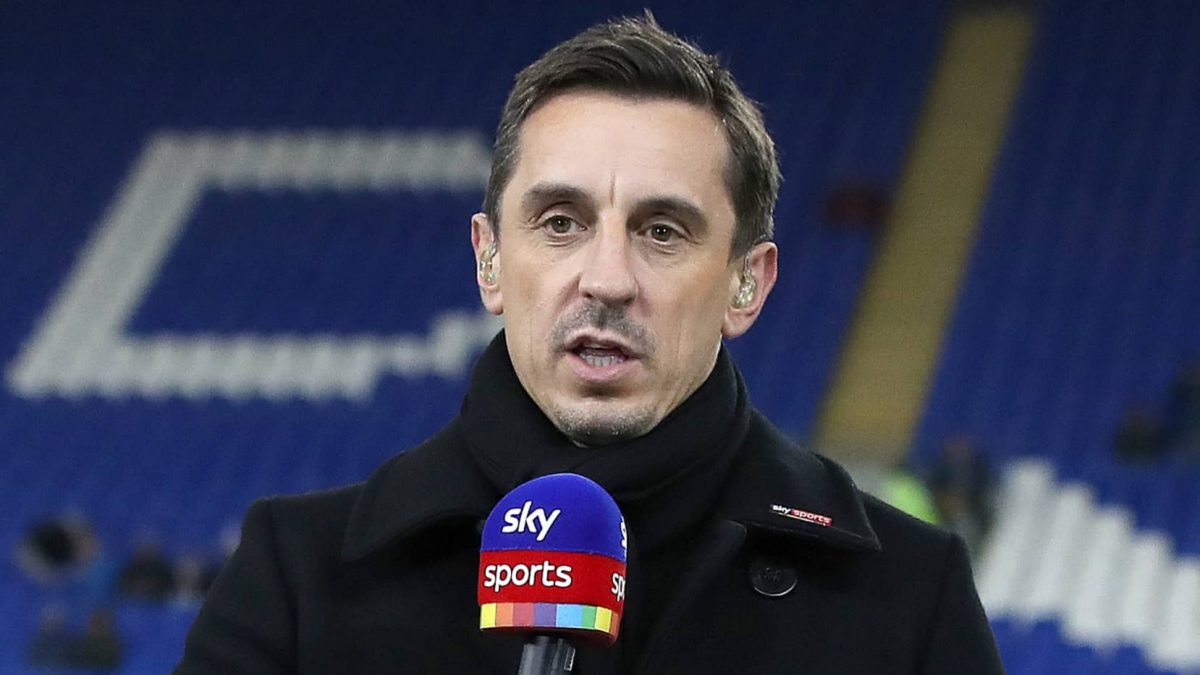 The Prime Minister has a long record of racist comments and they came back to haunt him live on Sky Sports on Saturday night.

Former England and Manchester United defender Neville, now a Sky Sports pundit, has been outspoken in defending the England team and their dignified response to racism.

On Saturday as Roy Keane nodded approvingly Neville accused Boris Johnson of fuelling racism in the UK in football as well as in wider society.

The sports presenters were discussing reports emerging of racial monkey gestures that appear to be from a Manchester City fan to Manchester United’s  Fred and Jesse Lingard during Saturday’s Manchester derby at the Etihad Stadium. Manchester City and the police are investigating an incident that occurred in the second half of Manchester City’s 2-1 defeat.

Neville said: “You are watching the Prime Minister’s debate last night where he is talking about migration to this country, and people having to have certain levels.

“It fuels it all the time. It has got worse over the last few years in this country and not just in football.”

His comments were backed up by fellow pundit and former Liverpool legend Jamie Redknapp, who added: “It is a society problem.”

Boris Johnson has a long record of divisive nastiness. He talks of migrants who “leech, bludge and scrounge” off taxpayers. Visiting Uganda, Johnson cheerily said to UN workers and their black driver: “Right, let’s go and look at some more piccaninnies”—a racist word notoriously used by the Tory MP Enoch Powell in his ‘rivers of blood’ speech against immigration.

Johnson called Chinese people“puffing coolies.” “Left to their own devices,” Johnson said about locals in Africa “the natives would rely on nothing but the instant carbohydrate gratification of the plantain.”

He even accused Nelson Mandela who brought a peaceful end to racist white Apartheid rule in South Africa of moving Africa towards a “tyranny of black majority rule”.  More recently he caused a spike on racially-motivated attacks on Muslim women after describing them as bankrobbers and letterboxes.

Johnson has also failed to apologise for disgusting comments about working class Brits and working single mothers that recently emerged.

Many took to social media on Saturday night in support of Gary Neville’s comments about the toxic racism that Boris Johnson’s words have led to, including Labour Party leader Jeremy Corbyn.

Labour’s candidate campaigning to unseat Boris Johnson in Uxbridge and South Ruislip Ali Milani invited Gary Neville to join him in the constituency. He tweeted: “It is a conscious decision by @BorisJohnson to inject our society with anti-immigrant, scapegoating rhetoric. It’s how he divides us and protects his billionaire mates.”

A City statement after the match read: “Manchester City FC are aware of a video circulating on social media which appears to show a supporter making racial gestures during the second half of the match against Manchester United this evening.

“Officials from the club are working with Greater Manchester Police in order to help them identify any individuals concerned and assist with their enquiries.

“The club are also working with GMP regarding an instance of objects being thrown onto the field of play.

“The club operates a zero tolerance policy regarding discrimination of any kind, and anyone found guilty of racial abuse will be banned from the club for life.”

English football’s equality and inclusion organisation Kick It Out said it had been “inundated with reports of alleged racist abuse from a number of individuals” during the game.

READ MORE: Tory peer: it is ‘career ending’ to speak out about racism in Conservative party, Johnson’s comments are not fitting for a PM