On a visit to a garment factory organised by Conservative Campaign HQ, the Tory leader refused to apologise for a decade of cuts by his party. 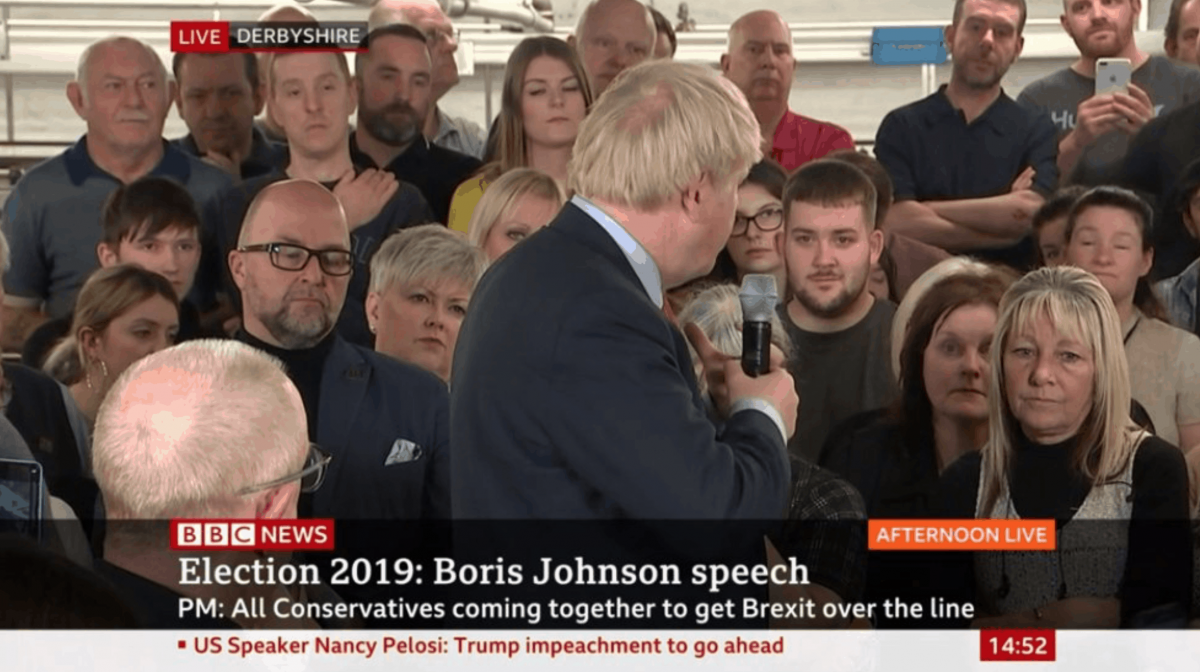 Less than 24 hours after Jeremy Corbyn addressed cheering crowds in Derbyshire, the PM popped in to protests and difficult questions.

On a visit to a factory organised by Conservative Campaign HQ, the Tory leader was quizzed about the dreadful affects of a decade of cuts and repeatedly asked to apologise on behalf of his party.

The PM did not travel on the bus, which led to shouts of “Boris, where are you?” from local protesters.

In an address to employees there, the PM repeated soundbites and jokes about the need to “get Brexit done” and said his deal could be brought back to Parliament “before you cook your Christmas turkey” if the Tories win on December 12.

But in definitely the best sewing political metaphor of the day, Johnson then tried his hand at using a sewing machine to stitch a label onto a garment with “Get Brexit Done” on it.

“You missed,” he was told on his first attempt. “I don’t want to get my finger,” replied Johnson, who finally managed to stitch the Brexit label on his second attempt. But it wasn’t his lack of sewing skills that left the PM red faced.

Asked repeatedly at a factory visit in Derbyshire if the Conservative Government had “cut too much”, Boris Johnson refused to apologise for austerity and its impact.

The PM was not only pressed to say whether his  cut too much funding when it came to austerity.

The factory workers and journalists attending did not seem entirely convinced by his soundbite about “getting Brexit done” within weeks.

When told there were still months and years more of Brexit negotiations beyond getting his Withdrawal Agreement approved, Johnson claimed his approach would “let this country move on”.

Andrew Gwynne, Labour’s national campaign co-ordinator, said in a statement: “He won’t apologise because he is standing on a manifesto that has austerity baked in.

“The Conservatives want to usher in more cuts to our public services and more giveaways to the super-rich.”