During an election campaign there are certain politicians that you suspect would do a lot more for their party’s chances of getting elected if they went caravaning in Outer Mongolia for the whole duration rather than appear anywhere the British public can see them. Boris Johnson as he has proved yet again is definitely towards […]

During an election campaign there are certain politicians that you suspect would do a lot more for their party’s chances of getting elected if they went caravaning in Outer Mongolia for the whole duration rather than appear anywhere the British public can see them.

Boris Johnson as he has proved yet again is definitely towards the top of that list. And yet, somehow the most indiscrete man in British public life has been representing Britain on the world stage for almost a year. As he campaigns for another stab at leading the Foreign Office through the stormy waters of leaving our trading partners in the EU that he largely dropped us all in, here is an extract from Heathcote Williams’ book Brexit Boris: From Mayor to Nightmare that everyone needs to read to understand just how much of a nightmare that is.

William’s meticulously researched and inimitably graceful prose details the lies, the sackings, the betrayals, the racist insults, the brush with criminality, that should all have got Boris Johnson disbarred from ever being considered for high office, let alone qualified him from one of the most important posts in Britain, in charge of MI6 and GCHQ intelligence services.

Boris Johnson: the man with no moral compass who became UK foreign minister

Boris Johnson has something about him that feels at home in a braying mob. In his campaign to restore foxhunting (now illegal) and in his preposterous urging of his fellow-Londoners to take up foxhunting as a way of dealing with urban foxes (Johnson was distressed when the family cat was snapped at by a visiting fox) he is clearly unafraid of the implications of Oscar Wilde’s description of foxhunting as the “pursuit of the uneatable by the unspeakable”. There are many ways in which Johnson qualifies as unspeakable.

The following quotes should be enough to convey a sense of the mind-set of this ‘national treasure’ whom the governing party in Britain has been turning into a cult figure and crediting with inflated gifts such as his being able to rebrand the Tory Party, so often nicknamed “the nasty party”.

Unfortunately for such a project, Johnson has more than his own share of nastiness. He talks of migrants who “leech, bludge and scrounge” off taxpayers. Visiting Uganda, Johnson cheerily said to UN workers and their black driver: “Right, let’s go and look at some more piccaninnies”—a racist word notoriously used by the Tory MP Enoch Powell in his ‘rivers of blood’ speech against immigration.

More egregiously still, he adds: “The problem is not that we were once in charge, but that we are not in charge any more.” He accused Nelson Mandela of moving Africa towards a “tyranny of black majority rule”. And he also used his column in the Spectator to claim that the Stephen Lawrence inquiry was a “witch-hunt” against the police.

Theresa May, arriving at Downing Street on 13 July 2016 to take up her new role as prime minister, vowed to lead a government that worked for all, and not just for the “privileged few”, as she put it. To this end, and on the same day, she appointed one of the most privileged few in the country to serve as her Foreign Secretary.

The undiplomatic Boris Johnson is to be Britain’s leading diplomat. Will he be able to restrain himself from trying out his prize-winning Spectator limerick about the Turkish Head of State on President Erdogan in which: “A young fellow from Ankara/ Who was a terrific wankerer / Until he sowed his wild oats/ With the help of a goat”? The world awaits the re-release of Boris’s bestial squib with bated breath for no gaffe is now off-limits.

The most indiscreet man in public life will now also be in charge of MI6 and GCHQ: a man with no moral compass is in charge of a senior department of military intelligence and a lying journalist becomes the Chief Panjandrum of the doughnut-shaped surveillance centre.

On learning this farcical news the Daily Mirror suggested that “Britain’s credibility will now be hanging by a thread” and it illustrated its front-page story with a photograph of the ludicrous Johnson stranded in mid-air on a zip-wire in a publicity stunt that went wrong.

The Mirror was right and the world reacted with bewildered horror, disbelief and ridicule. When the US State Department spokesman Mark Toner heard the news, he struggled to keep a straight face and the American political scientist, Ian Bremmer, hoped that it might all be a joke. “Maybe the Brits are just having us on. We probably deserve it.” 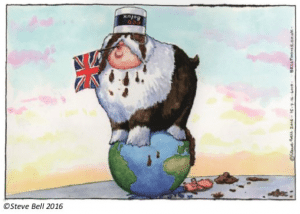 The French Foreign Minister, Jean-Marc Ayrault, said despondently: “During the campaign he lied a lot to the British people. I need a partner with whom I can negotiate and who is clear, credible and reliable.” His appalled reaction was echoed by Johnson’s audience when, shortly after his appointment, Johnson appeared at the French Embassy only to be soundly booed and jeered.

Germany’s foreign minister, Frank-Walter Steinmeier, condemned Johnson’s conduct in the run-up to the EU referendum as “deceitful and reckless” and he called the new foreign secretary’s behaviour ungeheuerlich, meaning outrageous. “People in the UK are experiencing a rude awakening after irresponsible politicians first lured the country into Brexit and then, once the decision was made, decided to bolt from responsibility, and instead go off and play cricket.”

Meanwhile, Boris Johnson’s neighbours, feeling the need to apologise on his behalf, fixed a notice to the railings of his house which read in capital letters: SORRY WORLD.

By contrast, at his first Foreign Office press conference—held jointly with U.S. Secretary of State John Kerry—Boris Johnson gave his latest reworking of “sorry, but not sorry”. When challenged about his insults to men, women, races, cities, countries and continents, Johnson arrogantly declared: “It would really take me too long to engage in a fully global itinerary of apology to all concerned.”

Theresa May once spoke of her regret that the Tory Party was known as “the nasty party”. Her ill-starred appointment ensured that its malign character would be maintained for some time to come.

Heathcote Williams’ book Brexit Boris: From Mayor to Nightmare, in which the dark side of Johnson is forensically exposed is illustrated by six of the UK’s top cartoonists and is available from Public Reading Rooms for £8 post free.