“There’s no doubt there are big fundamental questions being asked of the UK as a political entity right now," Nicola Sturgeon said. 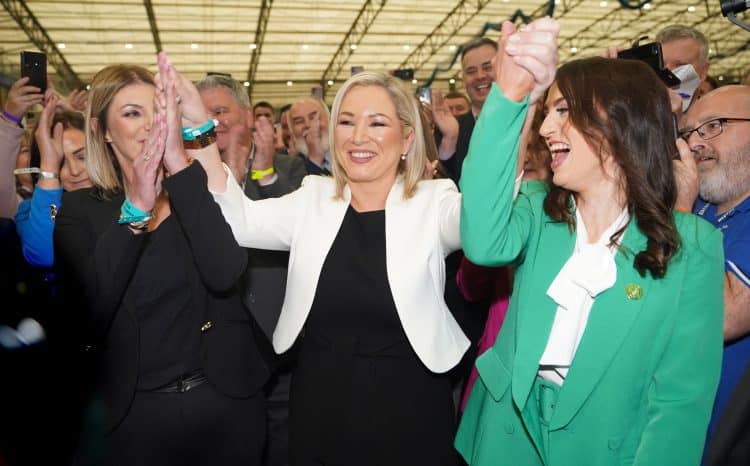 Evidence that Brexit has aided the breakup of the United Kingdom was there for all to see after Sinn Fein grabbed a historic victory in the Northern Ireland Assembly election.

The result has made it the largest party at Stormont for the first time and “ushers in a new era” for the country, the party’s vice president Michelle O’Neill said.

As counting concluded in the early hours of Sunday morning, the final results confirmed what had long been likely, that the Republican party would force the DUP into second place.

They took 27 seats to the DUP’s 25, and now have the right to appoint the first minister in what has been described as a remarkable historic event.

In Scotland, Sinn Fein’s performance has been framed as yet more proof that the break-up of the United Kingdom is imminent.

Nicola Sturgeon said a victory for the nationalist party in Stormont raises “big questions” around the future of the UK “as a political entity”, pointing to strong nationalist performances in her own country and in Wales, too, where the Tories had their worst fears confirmed.

“If (Sinn Fein) emerge as the largest party today in Northern Ireland which looks very likely, that will be an extraordinary result and something that seemed impossible not that long ago,” Sturgeon said.

“There’s no doubt there are big fundamental questions being asked of the UK as a political entity right now.

The case for a clean break in Scotland has been on the cards for a long time.

Poll after poll has shown there is renewed support for it, which is hardly surprising given that the vast majority of Scots voted to remain in the European Union and only a quarter actually backed the ruling party back in 2019.

But a clearer picture is now emerging elsewhere.

He said the European single market “effectively continues” in Northern Ireland under the terms of the agreement reached between the UK and the EU, with a border in the Irish Sea.

This creates “contradictions” in Northern Ireland’s relationship with the EU and the rest of Great Britain, which bodes “extremely ill” for the future.

Soon, the nationalist’s call could be too strong to resist, with the Westminster left fighting fires on all fronts.