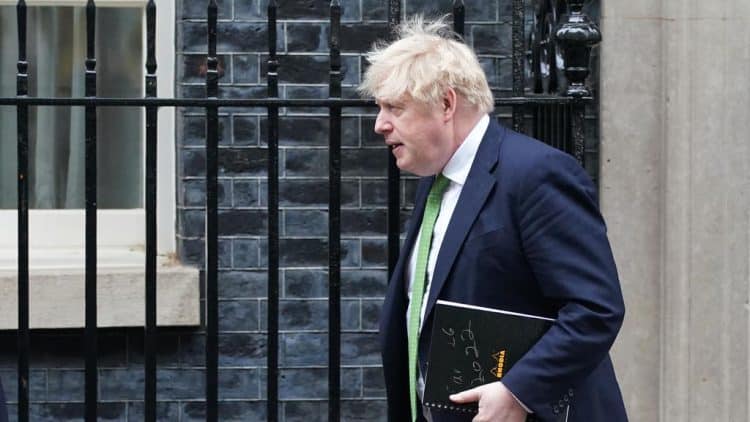 The Government will have “no credibility” on tackling Russia’s aggression in Ukraine until the Conservative Party no longer accepts Russian-linked donations, Labour has claimed.

Downing Street defended donations made to the Tories by people of Russian origin, saying it is “wrong and discriminatory to tar them with the same brush” when many are critical of the Putin regime.

Labour said £1.89 million has been given either to the Conservative Party or Tory MPs since Boris Johnson became Prime Minister.

Earlier this month, shadow foreign secretary David Lammy and shadow chancellor Rachel Reeves claimed there had been £1.93 million in Russian-linked donations, but the figure has since been revised.

As MPs debated tackling illicit finance linked to the Russian state, Labour MP Dame Margaret Hodge (Barking) called for the Government to give donations from Russian-backed donors to organisations like Transparency International.

“Until the Conservative Party does that, they will have no credibility at all in the argument on fighting corruption,” she said.

Earlier, Foreign Secretary Liz Truss suggested Tory donors could be hit with sanctions if they have links to Vladimir Putin’s regime.

The picture, which was posted to Ms Truss’s Instagram page in April 2019, has the caption: “And it’s ladies night…#cabinetandfriends #girlpower”

Asked if the image shows the closeness of the UK Government to Russian money, she said: “What I can say to you today is that we will target anybody who we believe has links to the Putin regime, who is helping support and prop up the Putin government, and nothing is off the table in terms of who we target.”

Mr Lammy said Labour is concerned about “too much connection between Russian oligarchs” and donations to the Conservative Party.

“We think that they should hand back £2 million”

Speaking on BBC Radio 4’s Today programme, he said: “Our concerns are, I’m afraid, that there has been too much connection between Russian oligarchs and donations to the Conservative Party.

“But we’ve said this. We think that they should hand back £2 million.

“Frankly, it’s not clear entirely what’s going on. I mean, I just think this was a moment when Britain had to step up and demonstrate certain kinds of seriousness. It hasn’t happened.”

Foreign Office minister Amanda Milling said the party did not “accept foreign donations” and all donations were from British citizens “received in good faith after appropriate due diligence”.

The Cannock Chase MP added: “There are people in this country of Russian origin who are British citizens. Many are critics of Putin and it is completely wrong and discriminatory to tar them with the same brush.”

The Liberal Democrats said the Tories should hand cash from Russian-linked donors to civil society groups in Ukraine.

The party said the money could help support independent media in the country and counter Russian disinformation.

Foreign affairs spokeswoman Layla Moran said: “Boris Johnson should use the almost £2 million of Russian-linked donations received by the Conservative Party to support the people of Ukraine.

“This would send a powerful signal to Putin that the Conservatives are serious about no longer allowing themselves to be bankrolled by Russian money.

“It would also provide vital support to Ukrainians on the ground facing the threat of invasion and a sustained campaign of Russian disinformation.”

Meanwhile, Labour sought to distance itself from the Prime Minister’s claims over donations from a Chinese spy by insisting they did not go to the party directly but via an MP for staffing costs.

A Labour spokesman disputed a claim made by the Prime Minister during PMQs that “the largest single corporate donation to the Labour Party came from a member of the Chinese Communist Party” after it was previously revealed that Christine Lee had donated more than £500,000 to MP Barry Gardiner for staff costs.

The spokesman said: “To be clear, that was not a donation to the Labour Party, as has been well documented. These were donations to Barry Gardiner in support of staff costs that he had there, and in terms of the amount of money that went to the party centrally, the only amount that was donated to the Labour Party itself was £5,000.”

He said there was “a distinction between donations to members of Parliament and to the Labour Party” as recorded by the Electoral Commission.

However, Labour’s analysis attacking Russian-linked donors to the Tory party also included cash which had gone straight to Tory MPs, rather than the Conservative Party centrally.

The spokesman said: “In terms of the claims that we’re making about donations of Russian money to the Government, then absolutely. What we’ve said is that if you look at those donations, in terms of the support that has been given, it adds up to £1.89 million during the time that Boris Johnson has been Prime Minister.”

Asked if it was fair to include donations to Tory MPs in the analysis given Labour’s defence of Mr Gardiner’s donations, the spokesman said: “You’re dealing with two different things.”