Deborah Hodge stuck it to her landlord by marrying her pet cat - and now she's coming for Boris Johnson. 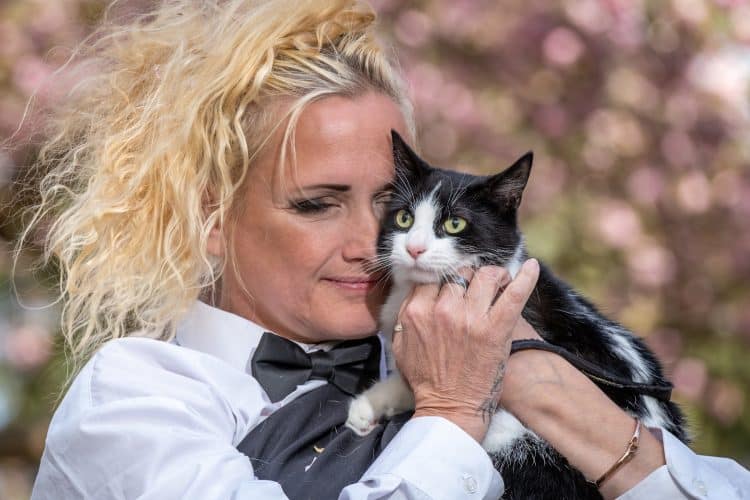 A woman who married her cat has declared her desire to be Prime Minister – and she’s convinced she’ll do a better job than Boris Johnson.

Deborah Hodge, 49, shot to fame this week after marrying her pet cat in a civil ceremony to stymie her landlord, who wanted her to get rid of the animal.

Deborah said she has been forced to rehome three animals over the years due to landlords not permitting pets inside their homes.

So she decided to marry her cat, India, in a ceremony in London last week – with single mum Deborah sporting a tuxedo and her furry friend in gold lamé.

She said: “I had nothing to lose and everything to gain so I married my cat! I recited vows under the universe that no man will ever tear myself and India apart.

“I set out my intention that I would never be separated from the animal I adore. I can’t be without India. She is truly a sensation, she is so friendly and amazing.

“She is fundamentally the most important thing in my life after my children. By marrying India, I need any future landlords to know that we come as a package and we cannot be separated under any circumstances as she is as important to me as the children.

“I refuse to be parted with her. I’d rather live on the streets than be without her.”

And Deborah’s campaigning isn’t stopping there, after she revealed that she wants to be Prime Minister.

“I know I am a bit silly, but I’m on my second PhD – and nobody is listening to protests and demonstrations,” she said. “My strapline is ‘better looking than Boris’.”

Admitting she is “not a politician”, Deborah revealed she wants to capitalise on being “viral at the moment” – and said she hopes to start a “movement”.

Referencing Ukraine’s President Volodymyr Zelensky, who has a background as a comic actor, Deborah vowed to “get in front of the one per cent”.

She said: “We don’t really have years left to get our stuff together. It’s like ‘Don’t Look Up’ but worse – much much worse.”