Critics of the Bury South's defection have been quick to point to his voting record. 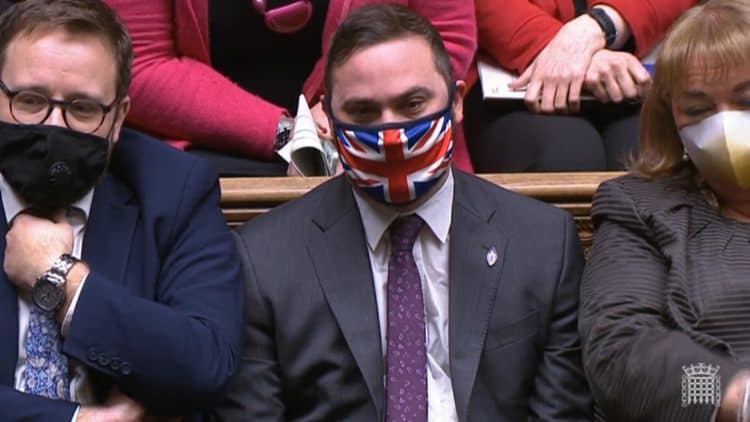 Bury South MP Christian Wakeford sitting on the opposition benches during PMQs in the House of Commons.

In a stunning movement of political theatre, the Bury South MP defected from Boris Johnson’s Conservatives minutes before Prime Minister’s Questions on Wednesday, crossing the floor to take his seat on the Keir Starmer’s benches.

But many were quick to point out that Wakeford, whose ‘Red Wall’ seat had been in Labour hands until the 2019 election, has a voting record starkly at odds with the rest of the Labour Party.

That sparked a outburst of criticism from leftwing groups, with Young Labour – the youth wing of the party – saying that the ex-Tory “should not be admitted to the Labour Party” and declaring him “not welcome”.

Others, meanwhile, drew a telling contrast between the politics of Wakeford – who was readily welcomed by Starmer on Wednesday – and former leader Jeremy Corbyn, who remains frozen out of the parliamentary party.

‘We need better than this’

The Bury South MP voted against addressing austerity, climate change and work insecurity, as well as affordable and safe housing for all and ending tax avoidance loopholes.

He also voted against social care reforms which would have made personal care free, and helped defeat a motion to end homelessness and rough sleeping.

In addition, Wakeford voted against preserving EU workers’ rights and voted to end the Erasmus+ study exchange programme after Brexit. He also voted against allowing domestic abuse victims have acess to benefits regardless of their immigration status.

“A man with his politics has no place in the Labour Party,” Momentum said. “Labour can not be the party of change at the next election, and welcome a Tory MP to their benches who has consistently voted against progressive policies and consistently with a disastrous Tory government.

“We need better than this.”

Their outrage was echoed by Young Labour, who tweeted: “Christian Wakeford MP should not be admitted to the Labour Party. He has consistently voted against the interests of working-class people; for the £20 universal credit cut, for the Nationality and Borders Bill and for the Police and Crime Bill. Young Labour does not welcome him.”

The group also pointed out that Wakeford himself had co-sponsored a bill necessitating by-elections for parliamentarians who switch party allegiance, adding: “The Labour Party must uphold Bury South members’ right to choose their own Labour candidate and constituents should be able to reassess their MP.”

That demand for a by-election appeared to be shared by Bury South CLP – Wakeford’s new local organisation, with LabourList reporting that members had already vowed not to back Wakeford to be the Labour candidate should a snap poll be held.

Meanwhile, right-wing blog Guido Fawkes revealed Wakeford had been “slamming the Labour Party during the 2019 election over their policies on Brexit, tax and referendums” on Tory WhatsApp groups.

The website revealed Wakeford said only six months ago that we are “seeing a paradigm shift whereby the Labour party no longer represents those working-class communities”.

On 18 January 2021, Wakeford reportedly called labour a “bunch of c***s”. And he previously allegedly said of Angela Rayner being tipped to shadow chancellor for the Duchy of Lancaster, shadowing Michael Gove: “Fuck me, that will be one to watch for the giggles”.

He also called The New European, a pro-EU publication, a “bunch of twats”.

But Starmer welcomed Wakeford, insisting he “always put the people of Bury South first”, saying he is “delighted that Christian has decided to join us”.

It is a significant contrast with his treatment of Corbyn, who the Labour leader has suggested may not be allowed to stand as a Labour candidate in Islington North at the next general election.

Sir Keir admitted he had not spoken to his predecessor since Corbyn’s response to the Equality and Human Rights Commission report into antisemitism in October 2020, which saw him suspended from the party and stripped of the whip.

Corbyn still sits in Parliament as an independent MP – and Starmer said this is likely to continue into the next election.

“He’s not got the whip at the moment – so he’ll be able to run but wouldn’t be able to as a Labour MP,” he told the BBC’s Political Thinking podcast. “It’s up to him. He knows what he must do to move this forward. He’s not chosen to do so – that’s his choice.”