Dressed in military green, the Ukrainian president looked on as Irish politicians wore bright hues of blue and yellow. 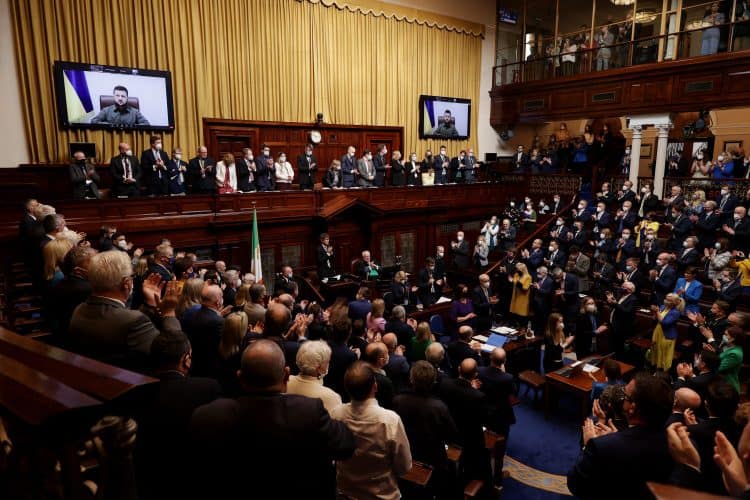 President Volodymyr Zelensky hushed the Irish parliament on Wednesday all the way from Ukraine, on a day when the languages of the two countries intermingled inside and outside the chamber.

The histories of the two countries are intertwined, the Dail heard, as Mr Zelensky spoke to a state marking 100 years since its foundation.

Those sentiments came not from Mr Zelensky himself, but from the politicians who pledged solidarity to the people of Kyiv, Mariupol, Bucha and a host of other war-torn towns.

The Ukrainian leader, when he spoke at 10am on Wednesday, had a different script to the leaders who have previously addressed a joint sitting of the Oireachtas.

He did not, like Tony Blair in 1998, regale politicians with memories of childhood holidays in Co Donegal.

Neither did he share snapshots from career-making moments in Dublin, as European Commission president Jean-Claude Juncker did in 2018.

Instead, Mr Zelensky asked for help during the first virtual address in the history of the Oireachtas.

What Irish politicians heard was a demand for Irish and European support for the country in the face of Russian aggression.

Gratitude too, but calls to go further.

Mr Zelensky said Ireland has supported Ukraine from the start of the war.

He said: “You did not doubt starting helping us, you began doing this right away and, although you are a neutral country, you have not remained neutral to the disaster and to the mishaps that Russia has brought to Ukraine.”

The voice of the Ukrainian leader, which has been heard in parliaments all the way from Brussels to Washington, was replaced by that of a translator.

But unmistakable was the impassive face of Mr Zelensky, which loomed above legislators from two screens behind Mr O Fearghail.

Dressed in military green, the Ukrainian president looked on as Irish politicians wore bright hues of blue and yellow.

Lapels, dresses and pocket-squares were all turned into expressions of silent support for Ukraine.

At the entrance to the Dail chamber, Oireachtas staff had also placed two small baskets of yellow and blue flowers.

Looking on too were around 50 ambassadors to Ireland from countries around the globe.

“Why are they doing this?”

Mr Zelensky told those gathered that Russia is using hunger as a weapon in its war against his country.

“This night, our territory was again hit by Russian missiles,” he said.

“They are destroying things that are sustaining livelihoods to people.

“They also have blocked all of our sea ports, together with the vessels that had already agricultural cargos for exports.

“Why are they doing this? Because for them hunger is a weapon against us ordinary people as an instrument of domination.”

The Ukrainian leader stayed just long enough to hear a message of support from Irish premier Micheal Martin, who had sat upright, leaning forward, as he listened intently.

Mr Zelensky must have heard too, from thousands of miles away in Ukraine, the thunderous applause from senators and TDs inside the Dail chamber.

Not all members applauded – four People Before Profit TDs refused to clap, even as other politicians stood for a minute of applause.

The reason, a spokesperson said, was a disagreement with calls from Mr Zelensky for Nato involvement in the war, as well citing demands for more sanctions and a “decision to ban opposition parties” in Ukraine.

“Russia will have to live with the shame of what they have done in Ukraine for generations. Those responsible will be held to account,” Mr Martin told the Dail.

“We are with Ukraine and I am certain that, in the end, Ukraine will prevail.

“We are a militarily neutral country. However, we are not politically neutral in the face of war crimes. Quite the opposite.”

Outside the gates of Leinster House in the Irish capital, a small group of Ukrainian supporters gathered to listen to proceedings.

Irish and Ukrainian schoolchildren from St Joseph’s in the Dublin suburb of Fairview sang the national anthems of the two countries.

Nick Kozlov, from the Ukrainian Crisis Centre, led the crowd in chants.

“I believe, if we have young people like this, Ukraine will never be beaten,” he said.