A man who voted Leave in 2016 EU has told LBC presenter James O’Brien that he has regretted his decision ever since. 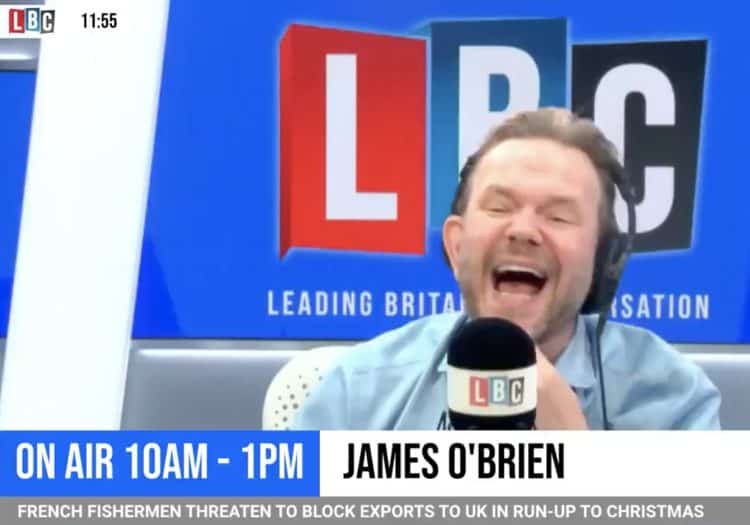 A man who voted for Brexit has told LBC’s James O’Brien that he has regretted his decision ever since – and recent fuel shortages have awoken him to the negative impact of leaving the EU.

The man, who was 27 at the time of voting, said he votes Tory because he comes from “a really working class background”, adding: “I’ve built myself a career and I’ve done well and people say, vote Tory because all the Labour Party are gonna do is tax you to death.”

But over the last year, he admitted it has been a “very difficult pill to swallow” because “not all people who voted Brexit are racist”.

He said: “I think I am a fairly normal sort of person. I’m a busy guy, I have a really intense job. I don’t have any particularly left or right views of politics. I’m pretty straight down the middle with it. And I made the wrong decision.

“The thing is, I agreed with you about everything apart from the Brexit thing, and I never knew why I disagreed. The only reason why I disagreed with you about Brexit is because I voted Brexit and it wasn’t until I was sat in my car waiting for the thick end of an hour to put fuel in my car last week, that I sat there and I thought to myself, ‘Oh my god, I think he’s right’.”

He added: “You should have just said mate.

“It put your mind back to other things that you’ve seen during this process. I’m a busy guy, I did not have time to look into the Brexit thing properly, all I had on my Twitter and Instagram feed was Farage screaming about dinghies and how awful it was but in reality it was incomprehensible to me that someone could drive a bus through London with £350 million a week for the NHS on it and that not be the case.”

The man also said the Vote Leave campaign never focused on the problems, but “sold” voters the cause of issues.

He said Leavers “would never say, ‘we don’t like foreigners, or we want foreigners out or we want less immigration’, they would say ‘Britain has the opportunity to train truck drivers, they are all coming here from Poland and earning £15 an hour’” – but said the claims were not true.

“How many more things do we have to see that weren’t true?,” he asked, adding: “The irony of the whole thing is, the pandemic will be the thing that masks the real wound.”