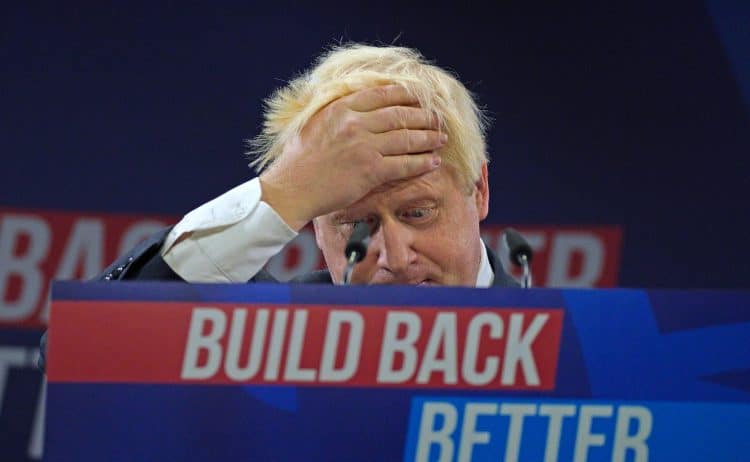 Did you watch yesterday’s PM conference speech? It was pretty detached from the reality of what is going on in the UK.

Well a headline in the Daily Express is almost as detached from reality as Johnson’s rambling words.

Even business hated the speech saying he lacked a coherent economic plan.

Richard Walker, managing director of Iceland and Leave voter, complained about the Government treating businesses like an “endless sponge” when they can only weather so many cost increases at once.

He told the Times: “The finger is being pointed at business as the bogeyman, but it’s much wider than that. We want to pay our people as much as possible but business is not an endless sponge that can keep absorbing costs in one go.

The Federation of Small Businesses criticised the 45-minute conference speech, noting Labour, and not the Conservatives, are the only party with a “pro-small business policy”.

Craig Beaumont, chief of external affairs at the Federation of Small Businesses, told Times Radio: “Looking at this party conference season, there was one party of the two that came out with a pro small business policy.

“And I think, you know, the Government should be looking at that and going: ‘Well, maybe we’ve taken this group a bit for granted’. So now, what is that small business offer? What is their response? And at the moment there isn’t much, so there needs to be a really strong response to the budget.”

Free market think tank the Adam Smith Institute described the address as “bombastic but vacuous and economically illiterate”, while Conservative think tank Bright Blue said there was “no inspiring new vision or policy”.

Ryan Shorthouse, director of Bright Blue, said in an interview with the Guardian: “The public will soon tire of Boris’s banter if the Government does not get a grip of mounting crises: price rises, tax rises, fuel shortages, labour shortages. There was nothing new in this speech, no inspiring new vision or policy.”