It has been reported that the PM and Liz Truss, his foreign secretary, are considering whether to unilaterally suspend parts of the agreement. 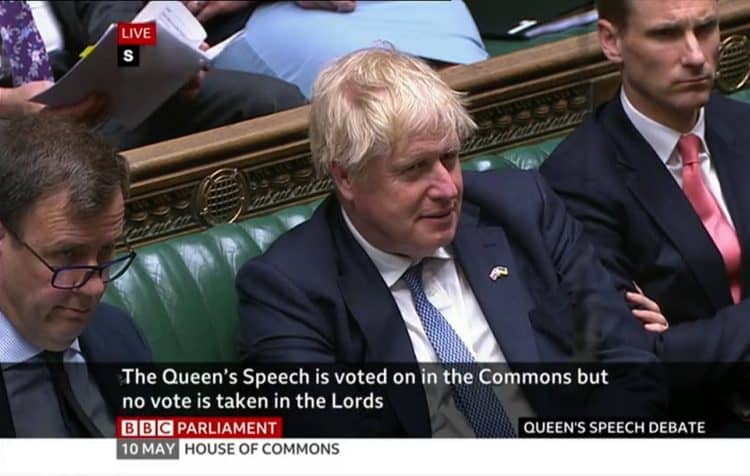 Boris Johnson struggled to hide his contempt for his predecessor as she warned he risks the UK’s reputation by breaching the Northern Ireland Protocol.

Speaking in the Commons, Theresa May cautioned the prime minister against tearing up parts of the agreement, saying he must consider the “wider sense of what such a move would say about the United Kingdom and its willingness to abide by treaties which it has signed”.

The former prime minister made her intervention as Johnson and Liz Truss, his foreign secretary, were considering whether to unilaterally suspend parts of the protocol – the controversial post-Brexit regulatory framework that aligns Northern Ireland more closely with the EU than the rest of the UK.

“No decisions have been taken”

A No 10 spokesperson has insisted “no decisions have been taken”, and added: “We want to fix some of the underlying challenges, and think the situation is extremely serious.”

The Democratic Unionists were pushed into second place and are refusing to resume power-sharing without changes to the protocol.

Jeffrey Donaldson, the DUP leader, told the Commons on Tuesday that there was “no consensus” in Northern Ireland for the protocol, and it was harming the economy.

He added on Twitter: “Spoke to the prime minister this morning and reiterated our position that we cannot nominate to an executive until decisive action is taken on the protocol.”

“The European Union is united in this position”

However, at the same time, the European Union executive ruled out any renegotiation of the protocol, responding to reports that Truss was planning to ditch the agreement.

In a statement after the Queen’s speech, Maroš Šefčovič, the European Commission vice-president responsible for post-Brexit relations, said: “From the very beginning, the EU has worked tirelessly to propose creative and durable solutions, showing flexibility on how the protocol should be implemented.

“The protocol, as a cornerstone of the withdrawal agreement, is an international agreement. Its renegotiation is not an option. The European Union is united in this position.”