“I'm afraid we are not going to be helping to shape the agenda with our EU counterparts." 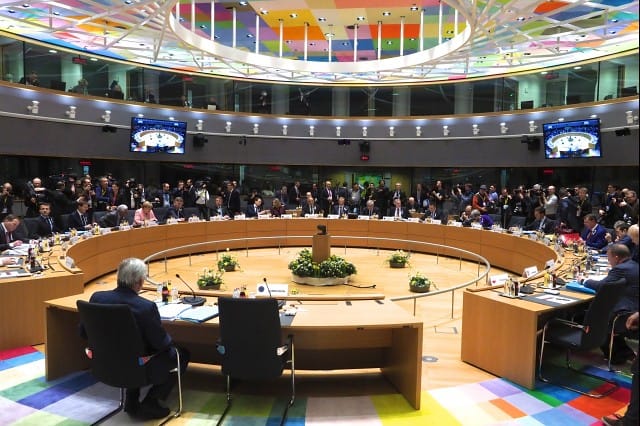 A crucial meeting between Western leaders will not include a representative from the UK, it has been revealed, following Boris Johnson’s controversial remarks likening the war in Ukraine to Brexit.

The Mirror has reported that it is “looking unlikely” that the prime minister will be invited to a European Council meeting with US president Joe Biden on Thursday – despite the fact that he will be in Brussels for a Nato meeting that day anyway.

Remarks linking voting for Brexit to fighting for Ukraine’s freedom have sparked outrage both at home and abroad, with the Financial Times saying the comparison is likely to reinforce the view in Europe of Johnson as a “populist who is determined to keep scoring points against the EU, six years after the Brexit vote”.

“We are not going to be helping to shape the agenda”

Peter Ricketts, a crossbench peer who was formerly the UK Government’s first national security adviser told Sky News in the wake of Errera’s comment that he did not think it “very surprising” that Johnson had not been invited.

“Given the sort of remarks he was making over the weekend, comparing Brexit to the struggle of the Ukrainian people, I mean, that was seen as desperately insulting and insensitive all around Europe,” he said.

“I’m afraid we are not going to be helping to shape the agenda with our EU counterparts.

“In the crucial discussions that will go on between Joe Biden and the Europeans, for example, on strengthening sanctions, the UK is going to be on the sidelines.

“I think the Prime Minister ought to be reaching out and working to improve relations to heal the wounds of the past with the EU, not doubling down.”

The SNP foreign affairs spokesperson, Alyn Smith MP, added that Johnson’s “crass and deeply insulting” connection of Ukraine to Brexit suggested the Prime Minister was “desperately trying to conjure some form of culture or trade war with the EU”.

Talking to the National, Smith said: “It appears his ignorance risks isolating Brexit Britain even further.

“That the Prime Minister has seemingly uninvited himself to this summit with his comments would be laughable were it not so serious. The fact that, years on and in the midst of massive crises, he’s still putting his party’s ideological Brexit before everything else shows how out of touch he and his party are.

“At such a crucial time we need a leader who is able to represent us at such summits on Ukraine, EU energy policy, and global Covid recovery, instead we have a man bumbling from one gaffe to another.”

The Stirling MP added: “Scotland didn’t vote for this Brexit mess yet we’re being made to pay the price many times over. This is just another in a long list of reasons why Scotland’s global interests would be best served with the full powers of independence.”