International tournament football is coming back to the UK, with a joint bid to host Euro 2028 with Ireland now officially running unopposed. 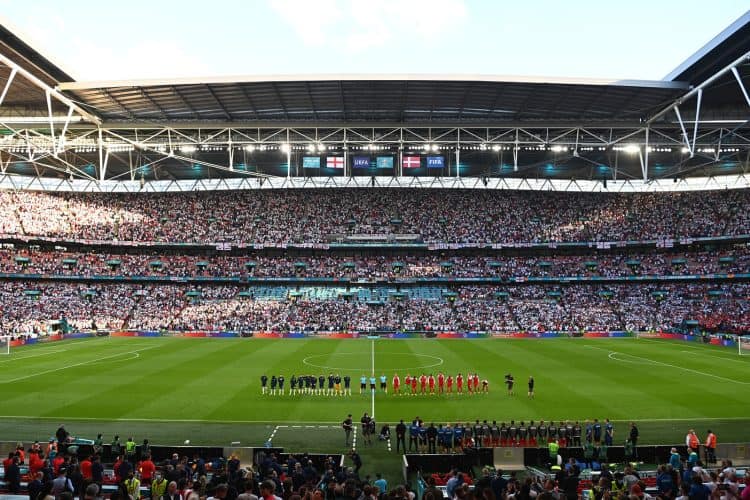 It’s coming home, so it is! The joint bid submitted by the UK and Ireland to host Euro 2028 will be approved within the next 48 hours, and UEFA are set to accept the unopposed application before Wednesday’s deadline.

The home nations have become unwitting beneficiaries in the race to host Euro 2028, thanks largely to the invasion of Ukraine. Russia were the other front-runners, but the multitude of sanctions imposed against Vladimir Putin and his people have ended their campaign.

Turkey has also dropped its interest, clearing the way for the Brits and the Irish. A final announcement is expected on Thursday 7 April 2022.

Hampden Park and Wembley were used frequently at Euro 2022, with the latter hosting SIX England games, both semi-finals, and a final that we’re not going to mention again… still, at least it’s good news for those amongst us who like to stick flares up their backside –

Just seven more years until we get these scenes again!

Yep, that really did happened pic.twitter.com/qnXbHw0UW2

Which stadiums will host Euro 2028?

In total, the bid features 18 stadiums that are likely to be used as tournament venues. There are five grounds that are guaranteed hosting rights, with a further 13 still considered as ‘preferred locations’. However, we aren’t expecting the list to change any time soon.

Two stadiums in Scotland will be picked, and Northern Ireland will also host tournament football for the first time. Ireland and Wales are home to three locations between them, with the other 12 venues situated in England.

London and the North West are the joint hubs of activity, and both will have FOUR grounds welcoming crowds at Euro 2028. We’ve got the full list below – and there may be one or two surprises here: