Protesters holding a flag which read “who voted for this?” were ejected from the hall after disrupting the speech. 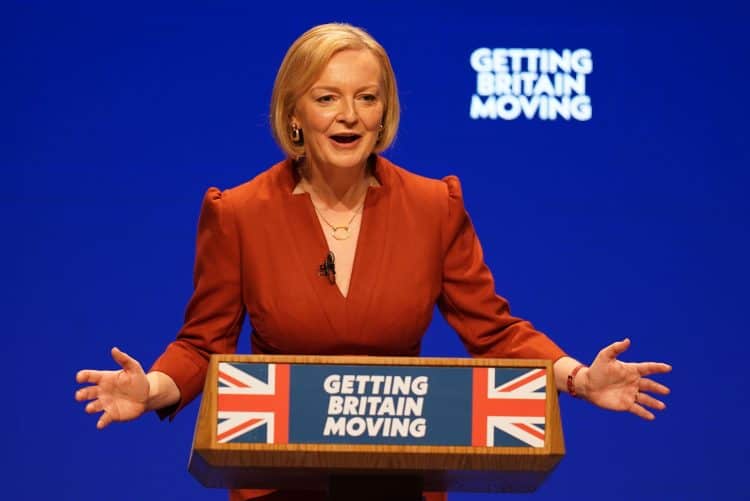 Liz Truss’s first conference speech as Tory leader was interrupted by heckling as she battled to unite her party.

She promised to steer the country through the “tempest” and “get Britain moving”.

Protesters holding a flag which read “who voted for this?” were ejected from the hall after disrupting the speech.

The Prime Minister has endured a bruising conference after just a month in the job, with a U-turn over a totemic tax policy and dissent within her Cabinet, and heckling during her speech illustrated the level of discontent.

She sought to rally Conservative activists behind her vision of a Government wholly committed to boosting economic growth.

She told the audience in Birmingham the country was in a “new era” under the King, following the death of the Queen.

“Together, we have mourned the death of Queen Elizabeth II, the rock on which modern Britain was built.

“We’re now in a new era under King Charles III.

“We’re dealing with the global economic crisis caused by Covid and by (Russian President Vladimir) Putin’s appalling war in Ukraine.

“In these tough times, we need to step up.

“I’m determined to get Britain moving, to get us through the tempest and put us on a stronger footing as a nation.”

Shortly ahead of her speech, YouGov released polling suggesting Ms Truss is already more unpopular than Boris Johnson or Jeremy Corbyn ever were.

Just 14 per cent of the public now say they have a favourable impression of the Prime Minister, compared with 26 per cent who said so between September 21-22 .

Nearly three-quarters (73 per cent) now see the Prime Minister in an unfavourable light, including more than half (55 per cent) who see her very unfavourably.

That gives her a net favourability rating of minus 59, depths not plumbed by Mr Johnson, who hit minus 53 in July, or Mr Corbyn, who fell to minus 55 in June 2019.