He also called him Dave, which is believed to be a far right myth. 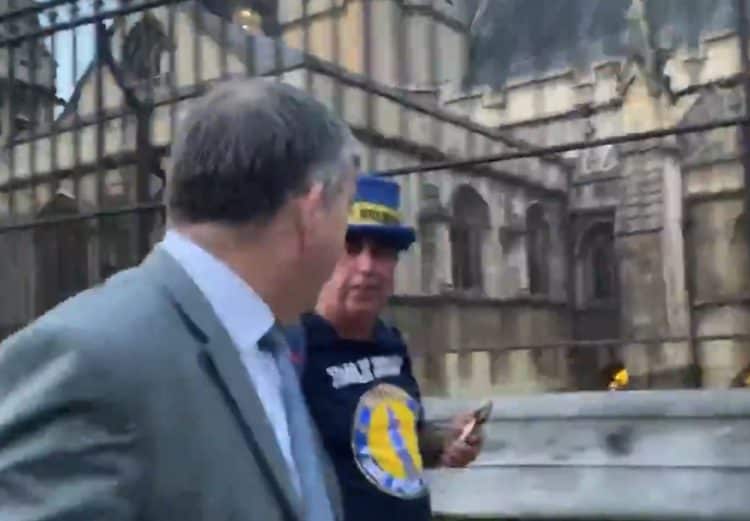 A Conservative MP has been filmed in a shouty exchange with ‘anti-Brexit guy’ Steve Bray outside parliament.

Nigel Adams, the MP for Selby and Ainsty and the Minister of State for Asia, repeatedly told Bray to “f*ck off” after they came to blows yesterday evening.

It comes just months after fellow Tory MP Lee Anderson was recorded telling the campaigner that he is “nothing but a parasite, a malingerer and a scrounger!”

Mr Bray, who sold a chunk of his coin collection to fund his marathon protest, has vowed to carry on campaigning after Britain formally left the European Union.

He told reporters that the focus will be on how to get back into the EU once the “proverbial sh*it” kicks in.

The grandfather has been so compelled by politicians’ Brexit “lies” that he switched his home in Port Talbot, South Wales, for a London flat on September 5, 2017, to counter the referendum result.

He has heckled politicians on numerous occasions and often targeted the PM, booming ‘Bollocks to Boris” through his megaphone.

Nigel Adams Tory MP not happy to answer some questions… tells me to fuck off & calls Sylvia a numpty. He also calls me Dave… a far right myth. #BrexitTax pic.twitter.com/OsZyufyuqj