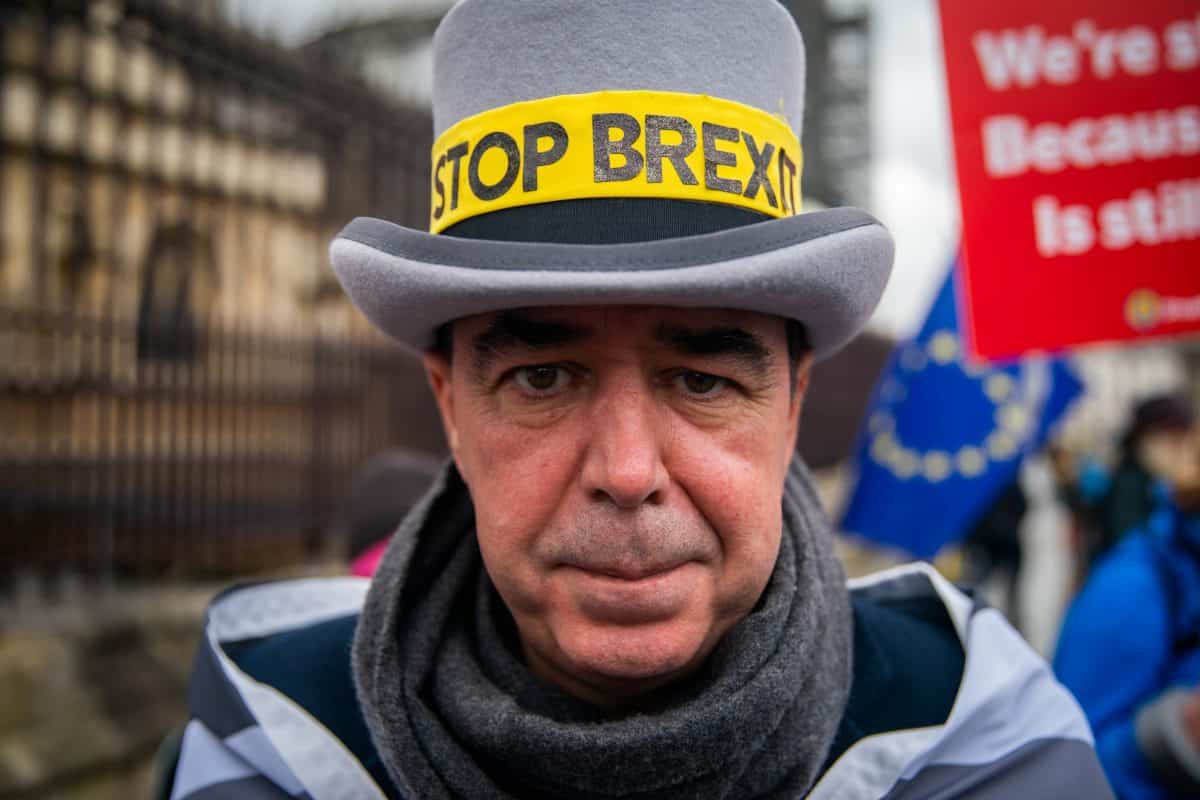 Britain’s staunchest remainer wore a grey top hat and Union flag today to mark his 847th and final day of campaigning to stop Brexit outside Parliament, this year. However, he vows to continue the fight to stop Brexit.

But Steve Bray, 50, claimed there was “still hope” on staying in the EU despite Boris Johnson’s landslide General Election victory.

Surrounded by supporters singing ‘He’s a jolly good fellow’ outside the House of Commons on Tuesday, the face of the remain protest movement, Steve Bray, said: “We have been here everyday parliament has been sitting since September 5, 2017.

“Today is my last day outside parliament this year. I picked today because it is parliament’s first day back after the election.

“It’s a grey day. That’s why I am wearing a grey hat and grey Union Jack, instead of blue, for the first time.

“I will stay on in London. We will continue campaigning but the message will change.
We won’t stand here shouting stop Brexit every day.

“How we move forward from here depends on whether the deal goes through and if Boris triggers leave on January 31.

“These are all things I’m still working on.”

Mr Bray, who sold a chunk of his coin collection to fund his marathon protest, vowed to carry on campaigning and said that the focus will be on how to get back into the EU once the “proverbial sh*it” kicks in.

The grandfather was so compelled by politicians’ Brexit “lies” that he switched his home in Port Talbot, South Wales, for a London flat on September 5, 2017, to counter the referendum result.

He heckled the Prime Minister, perhaps for a final time today, booming ‘Bollocks to Boris” through his megaphone as he returned to parliament surrounded by the flashing lights of police escorts.

Despite Boris Johnson’s storming victory, Bray denied that this was a sign Britain had now definitavely backed Brexit.

Speaking outside Parliament dressed in a grey, he said: “The majority of people, 53 per cent, voted for remain parties including Labour, Lib Dems, Greens and the Scottish National Party. That’s 1.2 million more people who wanted to remain than leave.

“That’s why we desperately need a system of proportional representation. If we had a referendum tomorrow, we’d win it.”

Bray vowed to continue battling to remain in the EU, despite conceding the chances of remaining were now ‘tiny.’

He said: “We haven’t left yet. There’s a tiny chance of staying in, so as long as we haven’t left, there’s still hope.”

The activist, who has almost become a household name, said he would continue living in London to keep up his political work.

He added: “Our future campaigning will be about holding government to account. Looking forward, to when the proverbial sh*t kicks in, we will look into how we can get back into the EU.”

Speaking to leavers, he said: “I don’t blame those people that voted to leave after being promised the earth, but the sad fact is that we are all going to end up in hell after Brexit happens.

“Every single think tank including the government sad that we are going to be worse of with any form of Brexit.

“We may have a high level of employment, but they are not quality jobs. They are zero-hours jobs.

“The financial sector is the crown jewel in terms of tax revenue. Now the bankers are moving to Germany and France. Our standing in the world is gone.”

He addressed fellow remainers and urged them not to give up hope.

He said: “We haven’t given up and we are not going to give up. We need to take this time to reflect about how we campaign and how to become a force to be reckoned with. As it stands we are the only effective opposition. We have to persevere.”

Bray conceded the election result was “devastating” and said that the focus now needed to be on how to “pick up the pieces.”

Asked whether he ever thought his anti-Brexit campaign would succeed, he said: “There are no winners in this. Whatever happens, we are all losers.”