Support for Scottish independence falls to near 2014 levels

In the first poll on Scottish voting intentions released in 2023, backing for a Yes vote was at 46 per cent when ‘don’t knows’ are removed. 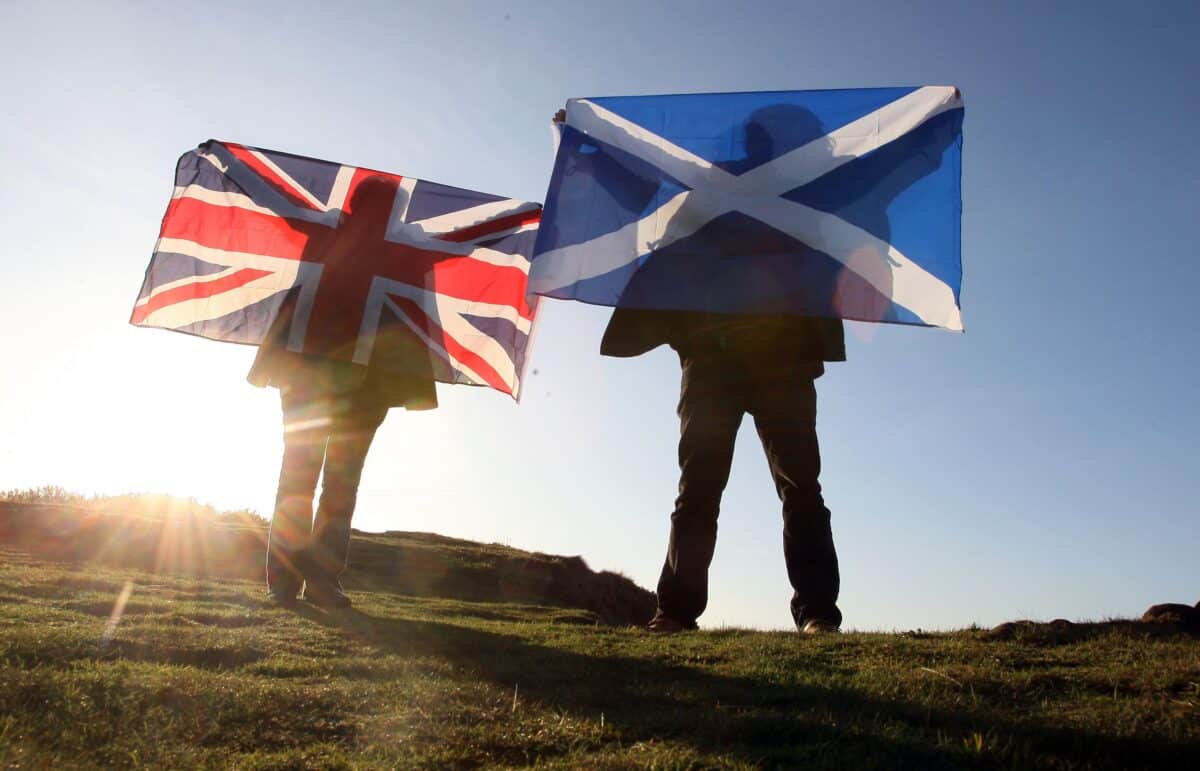 An opinion poll suggests 54 per cent of Scots would vote No in an independence referendum.

In the first poll on Scottish voting intention released in 2023, backing for a Yes vote was at 46 per cent when “don’t knows” are removed.

At the last referendum, support for independence was 45 per cent.

Yes ahead of No

It comes after a number of polls towards the end of 2022 put Yes ahead of No on the independence question.

The latest poll was carried out by Survation for advisory company True North, with 1,002 Scots being surveyed between January 10 and January 12.

For Westminster voting intention, the poll put the SNP on 43 per cent, Labour on 29 per cent, the Conservatives on 18 per cent and the Lib Dems on 7 per cent.

The poll also asked respondents how they would vote if the next Westminster election was a “de facto referendum on Scottish independence”.

Nicola Sturgeon has suggested using the next general election in this way.

Under this scenario, the SNP were on 45 per cent of the vote, when undecideds and those who would refuse to vote are removed.

He said: “Following on from polling conducted shortly before Christmas that pointed in the same direction, today’s poll suggests that the spike in support for independence registered after the Supreme Court judgement on indyref2 has proven to be temporary.

“At 46 per cent, support for Yes in today’s poll is little different from the 47 per cent figure Survation obtained when they previously addressed the issue last August.

“Meanwhile, the poll suggests that, at 43 per cent, support for the SNP would be well below the 50 per cent mark that Nicola Sturgeon would like to surpass at the next general election – though it also suggests that, at present, fewer than half would vote for pro-independence parties in a Holyrood ballot, too.”

He continued: “However, there is no evidence in the poll that fighting the next election as a de facto referendum would reduce the level of SNP support.

“Rather, slightly more voters (45 per cent) say that they would vote for the SNP in that circumstance.

“In truth, if the SNP are going to win over 50 per cent of the vote in either kind of election, the party will need first to persuade more people of the case for independence.”

Professor Curtice said most voters are assuming the cost of living crisis will grow worse.

He said: “In truth, voters are far from convinced that either the Scottish or the UK Government has the right policies to turn things around, though they are particularly sceptical about the policies emanating from Westminster.

“Not least of the reasons is that around seven in 10 Scots (71 per cent) think that the cost of living crisis is going to get worse and they are far from convinced that that the windfall tax on energy companies has been effective in reducing their bills.”

A ‘satirist’s dream’: Express journalists walk out on strike