"Mothers in the mother of all parliament are not to be seen or heard it seems…." 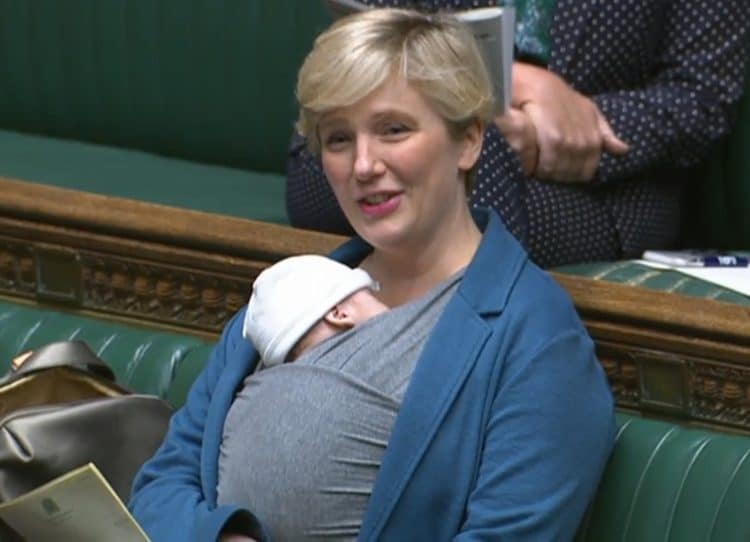 Labour MP Stella Creasy has called for change and insisted “politics and parenting can mix” after being told her three-month-old son was no longer allowed in the Commons.

Ms Creasy tweeted a photograph of an email addressed to her apparently from the Private Secretary to the Chairman of Ways and Means reminding her of the Rules of behaviour and courtesies in the House of Commons, which were updated in early September.

Paragraph 42 of the Rules states an MP “should not take your seat in the Chamber when accompanied by a child”, with the Private Secretary telling Ms Creasy this also applies to Westminster Hall.

Mother of all parliament

The email came following the Walthamstow MP’s appearance in the Hall on Tuesday with her three-month-old son, who is breastfeeding.

“Mothers in the mother of all parliament are not to be seen or heard it seems…. #21stCenturyCalling,” Ms Creasy posted with the photographed email on Tuesday afternoon.

In a separate post, Ms Creasy urged support for an campaign to get more mothers involved in politics.

“Other countries show it doesn’t have to be this way – If you want things to change so politics and parenting can mix, please join our project to help directly support mums of young children to stand for office.”

The BBC cited the House of Commons as saying it was “in communication” with Ms Creasy.

In late September, Ms Creasy’s then-newborn was strapped to her as she rose in the chamber to ask Commons Leader Jacob Rees-Mogg to ensure new mothers were supported rather than “rebuked” when returning to Parliament.

Mr Rees-Mogg said in response he thought the rules were “perfectly reasonable and entirely in line with the law”.

Ms Creasy had regularly taken her son and previously her daughter into the Commons chamber.

Neither child had been held by the Speaker, however, unlike in New Zealand in 2019.

Speaker Trevor Mallard attracted global fame as a so-called “baby whisperer” after helping to soothe a colleague’s infant – including rocking, bottle feeding and burping the child – during a debate in the chamber in Wellington.

A year earlier, the country’s prime minister Jacinda Ardern became the first world leader to take their baby on to the floor of the UN General Assembly.