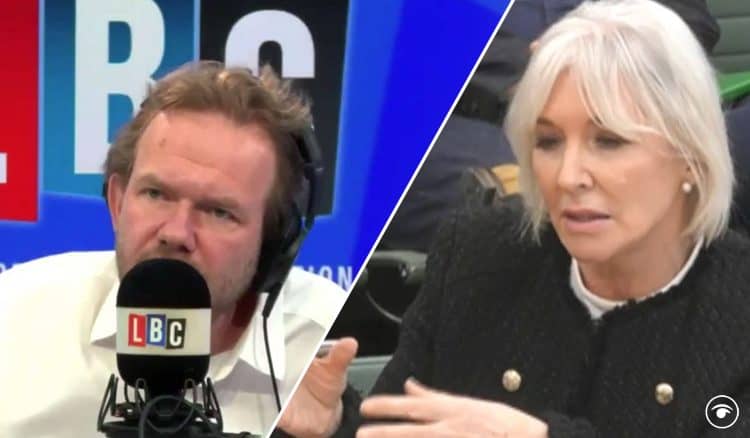 Nadine Dorries faced some tough questions over her controversial tweets about journalists as new online safety legislation was discussed in parliament.

The culture secretary was hammered by Scottish National Party MP John Nicolson about past comments she had made.

Nicolson pressed her over a tweet from 2017 in which she had attacked LBC broadcaster James O’Brien.

She had described him as a “public school posh boy f*** wit”, despite him attending the same school as her daughters.

Asked whether such correspondence would fall into the category of abuse under the government’s proposed online safety legislation, she replied: “I’m not going to answer any of these questions, I find them quite personal…”

However, the committee chairman and Tory MP Julian Knight, told her that under the potential online harms legislation she could have enormous power.

“If you search the number of times James O’Brien has persistently tweeted me to the point where we had at my office a number of years ago, probably about 18 months, two years ago, had to write to Global complaining that his behaviour was stepping into the realms of harassment – that was at the point which I sent that tweet.”

When Nicolson put it to her that she had allegedly implied he had mental health problems and had pushed for him to be sacked, she replied: “What I’d say is that, along with a number of female politicians, I am subjected to a small number of men who do tweet about me obsessively, aggressively, unpleasantly and James O’Brien is one of them.”

Nicolson carried on with his interrogation, raising an alleged “retweet” of a post in which he was described as a “hate preacher, a liar, a misogynist, a UK hater and an apologist for Islamist atrocities”.

When Nicolson put to her it was “defamatory and grotesque” she replied: “I don’t agree with you and I haven’t come here today to answer about tweets I sent years ago.

“I do understand the context, in my role as a secretary of state but as I said, as a female politician…I quite often do, as many females do, have to respond assertively to the numerous, aggressive, unpleasant tweets and I would – looking at your own tweet history – wouldn’t say it was something to be particularly proud of either.”

Although, a quick search of his own Twitter revealed Nicolson had apparently described Dorries as sounding “unstable” in 2017.