The party increased their councillor numbers by 20 and jumped back into second place in Scotland ahead of the Tories. 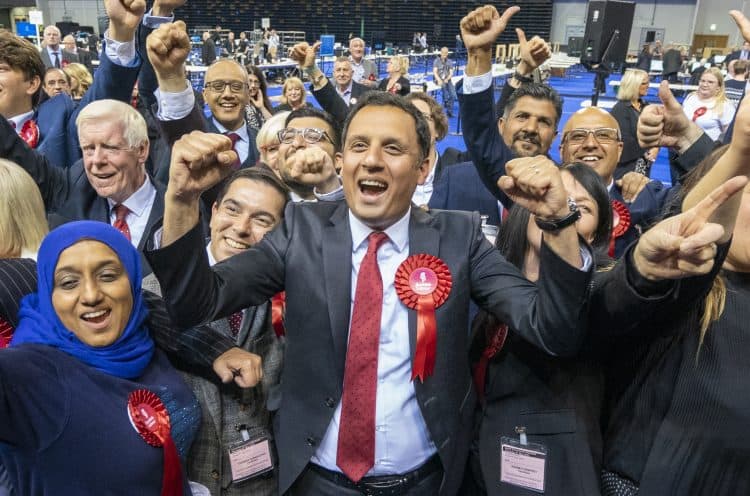 Scottish Labour is back, after making gains in this week’s council election, leader Anas Sarwar has said.

Speaking from Clydebank, West Dunbartonshire, where his party will form a majority administration in the local authority, the Scottish Labour leader said his party would not settle for second place and will push to take back Downing Street in the next general election.

Labour largely benefited from the Tory collapse in Scotland, which leader Douglas Ross said the Prime Minister must “reflect on”, increasing their councillor contingent by 20 and jumping back into second place.

“We aspire for first place”

Mr Sarwar took an optimistic stance after the results came in, saying on Saturday: “One thing is clear over the last 24 hours and that is the Scottish Labour Party is back.

“We’re back, yes in second place, but we don’t aspire for second place, we aspire for first place, and the same hope and energy we have demonstrated over the last year we will continue to do so we can get to a place, yes, to boot out Boris from Downing Street, but also to change our politics and change our country here in Scotland.”

When asked how he looked to take first place from the SNP, Mr Sarwar said: “Fourteen months we’ve been in the job and 14 months ago there were claims of Labour being pushed into fourth place – we were at 14% in the polls.

“We’re going to keep up that same energy and that optimism right across the country to be in a place, yes, to do our job, to boot Boris out of Downing Street and return a UK Labour government.

“But also to demonstrate to people that there is a more hopeful option, a change option here in Scotland that can go away from the bitterness and divisiveness of the SNP.”

The SNP also increased their share of the vote and total councillors in this week’s election, increasing their numbers by 22 representatives, taking their total to 453 compared with Labour’s 282.

When asked if the improvement in Labour’s fortunes was a “blip” because of dissatisfaction over partygate, Mr Sarwar said: “People will see right across the UK that Boris Johnson is not fit to be Prime Minister, he does not deserve to be Prime Minister.

“Every day he stays Prime Minister is a bad day for the United Kingdom, so the sooner we boot him out of office, the better.

“That’s the hope and energy we’re going to continue to demonstrate in the coming weeks, months and years so we can get back on the side of people.”