Scotland “can’t afford another five years of this divisive, distracting, destructive SNP obsession” with holding another referendum, she said. 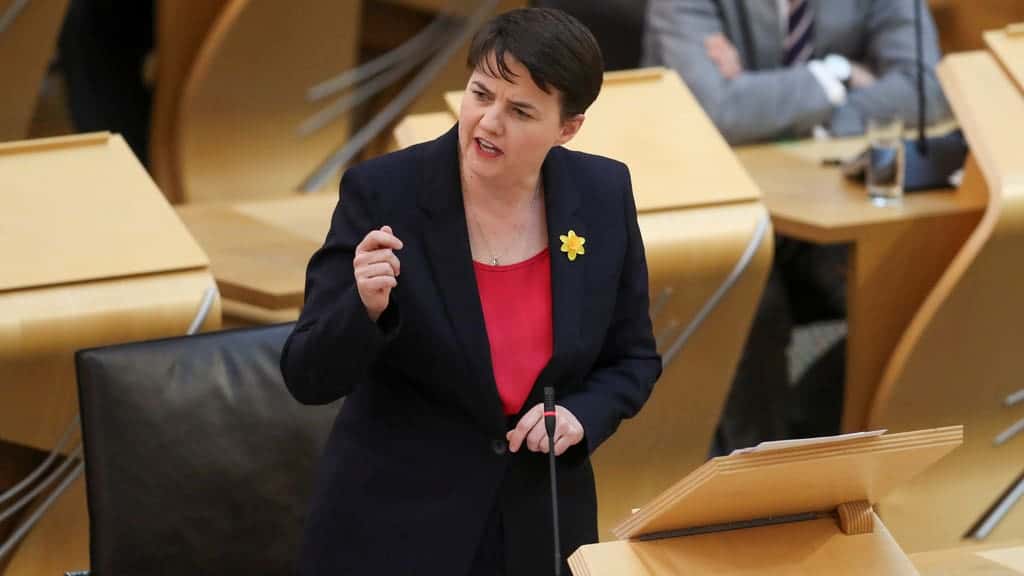 The Scottish Tories could deny the SNP a majority at Holyrood, Ruth Davidson has insisted as she hit out at the “increasing stench of sleaze and scandal” she claimed was coming from Nicola Sturgeon’s party.

Ms Davidson insisted that the SNP winning an overall majority’s in May’s Scottish Parliament election was no longer the “‘nailed-on’ near-certainty” that polls had once predicted.

But to stop Ms Sturgeon’s party winning that majority – and then using it to push for a second Scottish independence referendum – the Tory Holyrood leader urged all Scots opposed to breaking up the UK to back her party in the regional section of the vote, even if they had never voted Conservative before.

Speaking as she addressed the party’s  Scottish spring conference, Ms Davidson insisted it was only the Tories who could stop the SNP from winning more than half the seats in the Scottish Parliament.

“The only way to stop that SNP majority”

Ms Davidson, who is leaving Holyrood to take up a seat in the House of Lords, told the public: “Casting your ‘party’ vote for the Scottish Conservatives, even if you never have before, and even if it’s just this once, is the only way to stop that SNP majority.

“No other vote can be sure of preventing an SNP majority and the independence referendum they want to hold.”

She told the conference: “Labour are in third place across Scotland and they’ve said they won’t work with other parties to block the SNP.

“The Lib Dems are in fourth place and can’t effectively challenge the Nationalists.

“The Greens have backed the SNP throughout this parliament, and will do it all over again if they’re given the chance.”

While Ms Davidson accepted that “barring a complete implosion” the SNP would emerge from May’s election as the largest party, she was clear that a “majority Nationalist government can be prevented”.

"No other vote can prevent an SNP majority and the independence referendum they want to hold."#SCC21 pic.twitter.com/As9aCuPLnh

The Tory stressed this was “vital” because it was “the only way to be certain that Scotland isn’t dragged back into another independence referendum when we all need to be focusing on building a recovery from the pandemic”.

May’s campaign and vote, taking place amidst the ongoing coronavirus pandemic, will be an “election like no other”, Ms Davidson said, as she warned the outcome of the vote “could have profound consequences for our country as a whole and for families the length and breadth of Scotland”.

She warned if Ms Sturgeon’s party did succeed in winning a majority “they will put their obsession with securing a second independence referendum above Scotland’s national interest”.

Ms Davidson insisted: “At this uncertain time, the only priority that our governments should have is to work together to manage the Covid crisis and rebuild our country.

“But the SNP have made it clear, if they win a majority in May, they will try to hold another independence referendum in short order.

“They’ve said it could come as soon as the second half of this year.

“And some of them are even pushing for an illegal ‘wildcat’ referendum.

“In the midst of a global pandemic, when the only priority should be pulling together to defeat it, to get the country back on its feet, the SNP’s priority is to divide us all over again.”

"The SNP’s poor record of delivery across our public services, their increasingly highhanded attitude as a government that thinks it can do what it likes and get away with it, the increasing stench of sleaze and scandal…

While she said that Scotland “can’t afford another five years of this divisive, distracting, destructive SNP obsession” with holding another referendum, she also claimed that support for Ms Sturgeon’s party was on the wane.

The Tory MSP claimed: “Over the last few weeks, something in Scotland has changed.

“The Nationalist bandwagon, rolling unstoppably towards their dream of a second independence referendum, is now backfiring.”

Ms Davidson claimed there were a “lot of different reasons for this”, pointing to “the SNP’s poor record of delivery across our public services” and “their increasingly highhanded attitude as a government that thinks it can do what it likes and get away with it”.

But with Ms Sturgeon having being forced to deny claims from her predecessor Alex Salmond that there was a conspiracy against him, and MP Patrick Grady having stood down as chief whip after harassment allegations were made against him, she said there was an “increasing stench of sleaze and scandal” from the SNP.

SNP depute leader Keith Brown said the momentum is “firmly behind” his party.

“The Tories can dress up their desperation anyway they like, but they won’t fool Scottish voters who can see for themselves Boris Johnson’s attempts to rip up Scotland’s democracy, ” he said.

“Both votes for SNP at this election is the only way to deliver the change that is required if we are to build the greener, fairer and healthier Scotland that we all know is possible.”

Scottish Green Party co-leader Patrick Harvie said the Conservatives have “frequently backed the SNP in parliamentary votes to block progress”, adding: “Greens have a record and a vision for Scotland’s future, the Tories have Boris Johnson.”