As Ratcliffe embarks on his sixteenth day of hunger strike, a reminder of how the prime minister contributed to Nazanin's predicament. 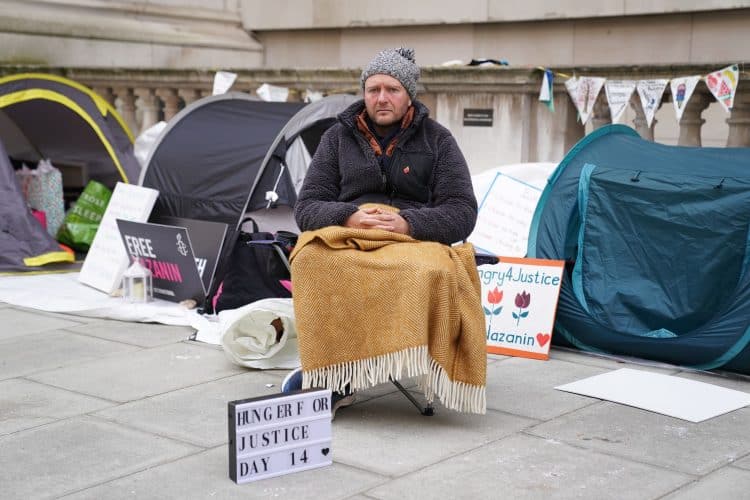 As the husband of Nazanin Zaghari-Ratcliffe reaches the sixteenth day of his hunger strike, here is a reminder of how Boris Johnson’s comments were used as proof of why she should be put in jail by Iran.

The prime minister, who was foreign secretary in 2017, was cited saying Nazanin was “teaching people journalism” – something which harmed the British-Iranian national’s case, according to her family.

“When I look at what Nazanin Zaghari-Ratcliffe was doing, she was simply teaching people journalism, as I understand it,” Johnson had said.

Johnson’s off-the-cuff remarks were cited as proof of Nazanin engaging in “propaganda against the regime” in an Iranian court hearing, despite her family and employer, the Thomson Reuters Foundation, saying she was on holiday introducing her daughter, Gabriella, to her grandparents.

At the time, the Foreign Office said Johnson’s comments provided “no justifiable basis on which to bring additional charges” against Nazanin – and that he was going to phone Iranian officials to “ensure” his remarks were not “misrepresented”. But he did not withdraw them, according to The Guardian.

But Richard Ratcliffe, Nazanin’s husband, said it was “deeply misleading” for both the British and Iranian governments to suggest Nazanin was held for something she personally did, demanding a clear statement from Johnson which would correct the mistake.

Ratcliffe also said it was “of course, no coincidence” that his wife was taken to trial the first working day after Boris Johnson condemned Iran, and urged the now prime minister to “speak out” and “avoid making false statements”.

He added: “The issue is not anything Nazanin has done. It is that Iran wants something from the UK, and Nazanin is being used as a pawn by the IRGC [Islamic Revolutionary Guard Corps] to make that point.

“Wrongly implying that Nazanin was doing something in Iran is particularly dangerous given the failure of the UK previously to stand up for Nazanin’s innocence.”

Tehran said at the time that Nazanin was imprisoned because she ran a BBC Persian online journalism course “aimed at recruiting and training people to spread propaganda against Iran”.

She worked for BBC Media Action several years before her trip – between February 2009 and October 2010 – and later moved to Thomson Reuters Foundation, a charity body linked to the Reuters news agency.

Ratcliffe, who has been on hunger strike for two weeks outside the Foreign Office in Westminster, said Johnson should use the opportunity of meeting the Iranian delegate at Cop26 to push for the freedom of Britons detained in Evin prison.

Nazanin has carried our several hunger strikes of her own, the longest of which had lasted 15 days, her husband said.

Speaking to ITV’s Good Morning Britain on Monday, as he began his sixteenth day on hunger strike outside the Foreign Office, Ratcliffe said: “I’m definitely looking rougher and feeling rougher.

“I don’t feel hungry but I do feel the cold more. It’s a short-term tactic. You can’t take it too long or you end up in a coma.”

He added that he will have to listen to his body when deciding when to end his hunger strike.

“At this point I will have to start listening to my body,” he said.

“Over the weekend I spent most of the day sitting down. The batteries were really flat.

“One of the things with a hunger strike is you get more stubborn the longer things go on, so you become less able to flexibly let go.”