Richard Ratcliffe is on a hunger strike outside the Foreign Office - and has been for two weeks. 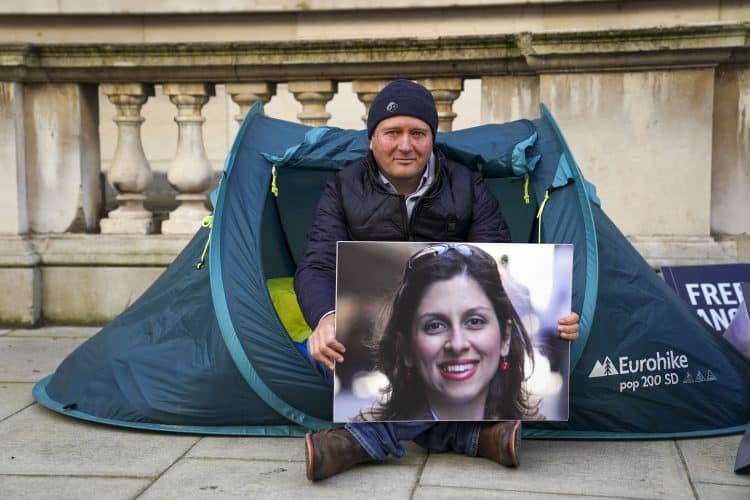 Richard Ratcliffe outside the Foreign Office in London. The husband of Nazanin Zaghari-Ratcliffe has gone on hunger strike for the second time in two years and intends to sleep in a tent at night following his wife losing her latest appeal in Iran. Picture date: Monday October 25, 2021.

Richard Ratcliffe, who has been on hunger strike outside the Foreign Office in Westminster for two weeks, said Mr Johnson should use the opportunity of meeting the Iranian delegate at Cop26 to push for the freedom of Britons detained in Evin prison.

On his 14th day of camping in Whitehall, Ratcliffe said he intends to continue the strike until at least the middle of next week.

Zaghari-Ratcliffe has carried our several hunger strikes of her own, the longest of which had lasted 15 days, her husband said.

Surrounded by a small group of relatives and supporters and wrapped in a blanket and hat, he said a candlelit vigil attended by around 70 people the night before had given him a morale boost to keep going.

When asked how he was faring, Ratcliffe said: “I’m feeling a lot flatter, its almost as if the batteries are a bit flat.

“As the days go on, the tiredness is a bit more obvious. But I’m still going and still grateful for everyone who’s coming along.”

Ratcliffe, who is being supported by his sister, the GP Rebecca Ratcliffe, added: “We have to be careful – the body slowing down is the first sign of pushing too far.

“But it is my intention still to be here when the Iranian delegation are in the UK.

“They are due to come on Sunday so I at least intend on being here until the middle of next week.”

Ahead of the arrival of the Iranian delegate at the Cop26 climate summit in Glasgow, Ratcliffe said he would like Boris Johnson to “take responsibility” and push for his cause.

“It is a cold decision to let the Iranian government keep British nationals hostage, like Nazanin,” he said.

“What I would like him to say to the Iranian delegation is that this can’t go on. We should find a way.

“He’s got an opportunity this week – he should take it.”

Ratcliffe added that his wife “lives in a state of permanent anxiety” in the prison.

Zaghari-Ratcliffe, a British-Iranian dual national, has been in custody in Iran since 2016 after being accused of plotting to overthrow the government.

She had been taking her daughter Gabriella to see her family when she was arrested and was sentenced to five years in prison shortly afterwards, spending four years in Evin Prison and one under house arrest.

According to her family, Zaghari-Ratcliffe was told by Iranian authorities that she was being detained because of the UK’s failure to pay an outstanding £400 million debt to Iran.