“The dangerous and inflammatory rhetoric emanating from Boris Johnson’s Government is now undermining all of the progress we have made in recent years." 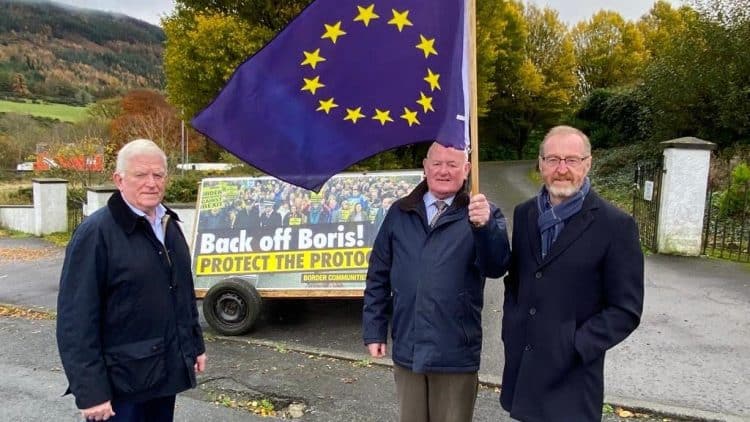 A series of demonstrations will be held along the Irish border next week telling Boris Johnson to “back off” on plans to trigger Article 16.

The group Border Communities Against Brexit (BCAD) will protest at five locations on the border between Northern Ireland and the Republic in support of the protocol.

It has accused the British Government of damaging the peace process with its threats to suspend elements of the treaty, which has prevented a hard border in Ireland but created trade barriers between Britain and Northern Ireland.

Speaking on Saturday, chairman Damian McGinnity said: “Boris Johnson’s Government has been pursuing a reckless course in negotiations with the EU around the protocol, including threats to trigger Article 16.

“Recent British Government statements and actions are posing a very direct threat to the peace process, the all-island economy and raising once again the horrific prospect of a return to a hard border in Ireland.

“We are calling on Boris Johnson to back off, and to protect and implement the protocol.”

Mr McGinnity said many in Northern Ireland believe the protocol is working, and has protected the region from the worst impacts of Brexit.

“Communities, businesses, workers, farmers and students along the border want the protocol to be implemented in order to protect jobs, livelihoods and community life on this island,” he said.

“Businesses, manufacturers and farmers are benefiting from the protocol and thousands of jobs are being created and secured as a direct result of it.

“The protocol has mitigated the worst effects of Brexit for communities such as ours.

“The majority of people and political parties in the North opposed Brexit and support the protocol as the key mechanism to prevent a hard border and protect the all-island economy and Good Friday Agreement.”

He criticised the British Government’s approach to the issue as damaging to the peace in Northern Ireland.

“The dangerous and inflammatory rhetoric emanating from Boris Johnson’s Government is now undermining all of the progress we have made in recent years,” he said.

“They need to listen to the concerns of border communities, to businesses and to farmers who will be devastated by any triggering of Article 16.

“Communities along the border are determined not to be dragged back to the past, it is shocking after years of Brexit uncertainty for border communities that a deal which was signed only a very short time ago is being torn apart.

“We will not allow any reimposition of a hard border and the untold social and economic damage this would cause.

“We will not allow the peace process to be undermined.”

BCAB will stage demonstrations at Flurry Bridge in Carrickcarnon, Belcoo/Blacklion, Moybridge in Aughnacloy, the Lifford Bridge and Bridgend in Derry from 3pm on November 20.

Mr McGinnnity said: “We are asking everyone living along the border, on either side, to make an effort to attend their nearest demonstration.

“We are calling on all trade unions, representative groups, civic leaders, sporting organisations and citizens to join with us on Saturday 20th November at 3pm to say loudly to Boris Johnson to back off and protect the protocol.”

Talks between London and Brussels over the contentious protocol remain deadlocked and there is speculation that the UK is poised to trigger Article 16 in the coming weeks.

The UK Government has set a December deadline for a resolution in talks on the protocol.

But Prime Minister Boris Johnson and Brexit negotiator Lord Frost have argued the EU’s interpretation of the deal has led to difficulties.

The EU has presented a package it believes will eliminate the need for 80% of checks, but the UK has insisted the oversight role of the European Court of Justice is removed, a move Brussels firmly rejects.

Lord Frost called for “new impetus and energy” to be brought to negotiations, which will continue in Brussels next week.