“I didn’t want to go out in an ambulance. I want to walk out with my head held high.” 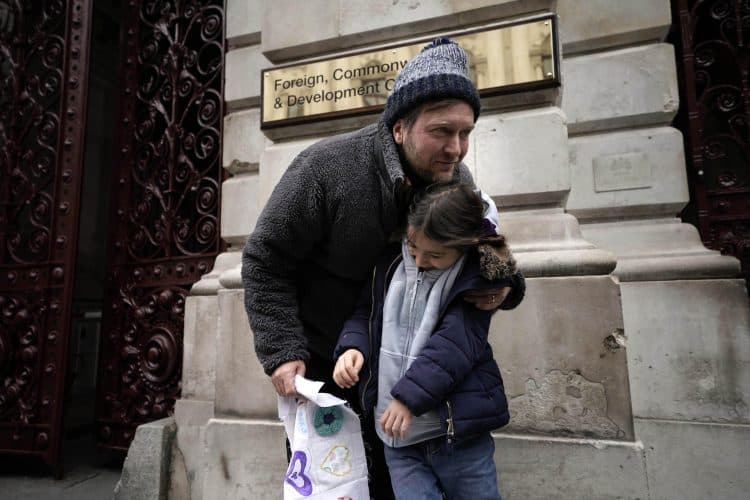 The husband of Nazanin Zaghari-Ratcliffe is ending his hunger strike in central London after almost three weeks.

Richard Ratcliffe has spent 21 days camped outside the Foreign, Commonwealth and Development Office (FCDO) without food.

He began his demonstration on October 24 after his wife lost her latest appeal in Iran, saying his family was “caught in a dispute between two states”.

On Saturday morning on King Charles Street, where Mr Ratcliffe has been staging his hunger strike, he told the PA news agency his job is to “keep going”, adding: “We probably hoped we’d get a breakthrough doing this. We haven’t yet.

“I didn’t want to go out in an ambulance. I want to walk out with my head held high.”

Mr Ratcliffe also criticised Prime Minister Boris Johnson for his “telling” absence in talking to him during the protest.

He said the Defence Secretary Ben Wallace stopped to visit him earlier, and one other Government minister has come to see him, but he acknowledged he has seen more people from the Labour benches during the demo.

He told the PA news agency: “We’ve certainly not had the Prime Minister come. And yes, I do think he has the capacity to do a disappearing act.

“I think his absence this past three weeks is telling. His absence on Nazanin’s case since he became Prime Minister is reasonably telling.”

Mr Ratcliffe said he may have been “naïve”, but “I did expect he would step up and sort it and he would deliver on the promises he made as foreign secretary once he had the power to do so”.

“In that time, not a single Government Minister has visited his camp outside the Foreign Office in solidarity.

“Will the Prime Minister take 5 minutes out of his day to visit my constituent today?”

Mr Ratcliffe said he backed Ms Siddiq’s view and said it is “probably too late” for Mr Johnson to visit him now, and he added that his wife has also requested a phone call from the Prime Minister.

His strike ended as a patchwork was due to be unveiled made from all the patches supporters have been sending throughout his time camped outside the FCDO.

Mr Ratcliffe said he was starting to get pains in his feet overnight, and after a chat with a doctor the decision was made to end the hunger strike.

He said he plans to go to hospital to get checked out on Saturday afternoon and then hopes to be able to eat something after that.

He said he did not feel things had “moved forwards” and accused the British Government of not giving a “clear enough message to Iran that hostage-taking is wrong”.

Mrs Zaghari-Ratcliffe, a British-Iranian dual national, has been in custody in Iran since 2016 after being accused of plotting to overthrow the government.

She was taking the couple’s daughter Gabriella to see her family when she was arrested and sentenced to five years in jail, spending four years in Evin Prison and one under house arrest.

According to her family, she was told by Iranian authorities that she was being detained because of the UK’s failure to pay an outstanding £400 million debt to Iran.

While Mr Ratcliffe said the Government “clammed up” and would not talk about the debt during his discussion with officials, The Guardian newspaper reported that the UK told Iran it could not pay the debt owing to restrictions brought about by sanctions, quoting Tehran’s deputy foreign minister.

According to the paper, Bagheri Kani said the two sides had agreed a payment of less than £500 million taking interest into account, and added: “Now what the UK Government are bringing up is the limitations on banking interactions, saying it is a difficulty, and finally they cannot do it.”

It is the second time Mr Ratcliffe has gone on hunger strike, having camped in front of the Iranian embassy for 15 days two years ago – a move he said had resulted in getting his daughter home.

Ms Siddiq tweeted on Friday to say she had secured a debate in Parliament on Mrs Zaghari-Ratcliffe’s situation and urged people to contact their MPs to ask them to speak in Tuesday’s discussion and “make the case for bringing Nazanin home”.