He received a standing ovation after giving an address to the European Parliament last week. 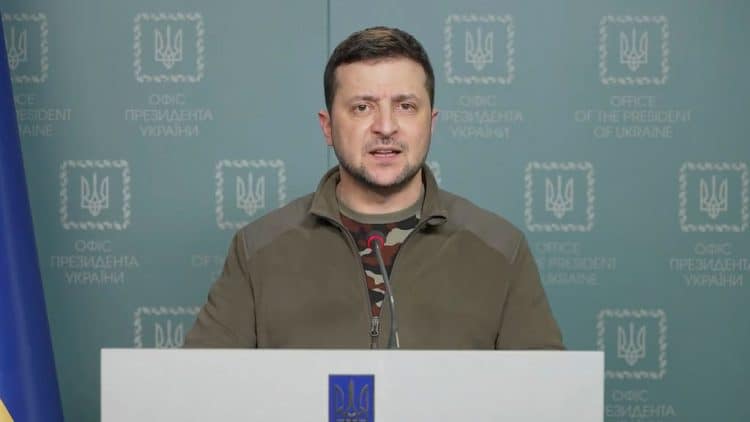 MPs will hear from Volodymyr Zelensky about the Ukrainian plight as Boris Johnson continues his diplomatic offensive to encourage Western leaders to punish Russia for the invasion.

Mr Zelensky will address the House of Commons at 5pm by video link after Speaker Lindsay Hoyle approved a request for a “historic address” from the Ukrainian president who, according to reports, is at risk of assassination by pro-Russian groups in Kyiv.

He gave an address to the European Parliament last week and imparted a virtual message to the US Senate on Saturday, with the embattled leader expected on Tuesday to renew messages from those speeches to MPs, including pushing for the West to install a no-fly zone over Ukraine and for more arms to be delivered.

The Prime Minister, who speaks with Mr Zelensky on a regular basis, has consistently ruled out the UK policing Ukrainian skies, arguing it would mean shooting down Russian planes.

A No 10 spokeswoman said: “The Prime Minister stressed that our goal must be ensuring Putin’s failure in this act of aggression against Ukraine.”

The Foreign Secretary met with the Ukrainian ambassador to the UK, Vadym Prystaiko, on the same evening.

Liz Truss tweeted afterwards that the UK is working to “cripple” Russia’s war effort and to rally the international community.

“The UK will do all we can to support the Ukrainian people. Putin must fail,” she added.

On Tuesday, Mr Johnson will host leaders of the Visegrad Four of central European nations – the Czech Republic, Hungary, Poland and Slovakia – to discuss the conflict.

The diplomatic efforts on the international stage comes as the UK Government faces domestic pressure to speed-up its efforts to grant safety to fleeing Ukrainians, with Labour criticising the process for being “painfully slow”.

The Home Office on Friday confirmed that 8,900 applications for refugees to come to the UK via the Ukraine Family Scheme had been submitted since Friday, but that only 300 visas had been issued.

“At this rate it would be weeks before many families reunite. Urgent action needed.”

Separately, Michael Gove said Russian president Vladimir Putin could inflict worse pain on the Ukrainian people than he has already.

The Housing Secretary, speaking to LBC’s Tonight With Andrew Marr programme, looked to downplay the threat of nuclear warfare but said Mr Putin had “a number of other options, all grisly, at his disposal before he ever goes anywhere near the use of… nuclear weapons”.

His comments follow after Ukrainian lawyers told the International Court of Justice that Moscow had resorted to “tactics reminiscent of medieval siege warfare” as Kyiv called for Western intervention to prevent further bloodshed.

An update from the UK Ministry of Defence published late on Monday said Russia “continues to directly target evacuation corridors, resulting in the death of several civilians while trying to evacuate Irpin”, near the Ukrainian capital.

A further £175 million of UK aid for Ukraine was announced on Monday, with Health Secretary Sajid Javid posting on social media that, following a fifth airborne medicines shipment, “around 485,000 items of essential medical supplies” had been delivered to help the war-inflicted country.

Meanwhile, new laws designed to tackle “dirty money” hidden in the UK cleared the House of Commons – although ministers were pushed to go further on seizing oligarchs’ assets.

The Economic Crime (Transparency and Enforcement) Bill received an unopposed third reading after it was rushed through in response to Russia’s invasion.

Aimed at uncovering Russian state-linked money, the legislation is set to establish a new register of overseas entities requiring foreign owners of property in the UK to declare their true identity.