"This war gets worse by the day.” 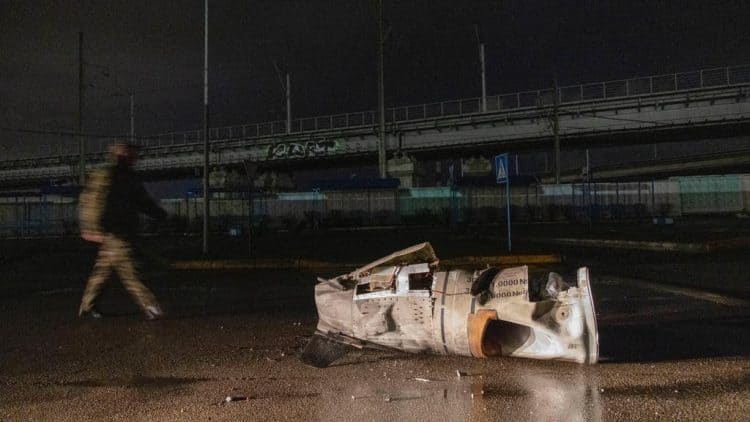 Harrowing footage has emerged of Sky News reporters being shot at in Ukraine by a suspected Russian ‘death squad’.

The team of five were attacked while out in a car, after unsuccessfully trying to visit the town of Bucha near Kyiv.

Chief correspondent with Sky News, Stuart Ramsay, along with camera operator Richie Mockler were shot – Ramsay in the lower back while Mockler took two rounds in his body armour.

Initially, the team of journalists thought that it was a Ukrainian army checkpoint firing at them – and they can be heard shouting that they are journalists and asking for their attackers to stop.

The crackle of gunfire can be heard and the flash of bullets flying past their car can be seen, as the attack was captured on camera.

“I do recall wondering if my death was going to be painful,” Ramsay said, recounting the moments before he was shot. “But what amazed me was that [being shot] didn’t hurt that bad. It was more like being punched, really.”

Eventually the group, including producers Martin Vowles and Dominique Van Heerden, as well as local producer Andrii Lytvynenko managed to escape from the car and jump down an embankment at the side of the road.

They eventually found refuge in a nearby garage, and were rescued under the cover of darkness hours later by Ukrainian police.

The journalists were later told that the gunmen were a saboteur Russian reconnaissance squad.

“It was professional, the rounds kept smashing into the car – they didn’t miss,” Ramsay said.

He added: “We were very lucky. But thousands of Ukrainians are dying, and families are being targeted by Russian hit squads just as we were, driving along in a family saloon and attacked.

“This war gets worse by the day.”

Elsewhere, a second attempt to evacuate civilians from a besieged city in southern Ukraine collapsed amid renewed Russian shelling, while Russian President Vladimir Putin turned the blame for the war back on Ukraine and said Moscow’s invasion could be halted “only if Kyiv ceases hostilities”.

Food, water, medicine and almost all other supplies were in desperately short supply in the port city of Mariupol on Sunday, where Russian and Ukrainian forces had agreed to an 11-hour cease-fire that would allow civilians and the wounded to be evacuated. But Russian attacks quickly closed the humanitarian corridor, Ukrainian officials said.

“There can be no ‘green corridors’ because only the sick brain of the Russians decides when to start shooting and at whom,“ Interior Ministry adviser Anton Gerashchenko said on Telegram.

The news dashed hopes that more people could escape the fighting in Ukraine, where Russia’s plan to quickly overrun the country has been stymied by fierce resistance. Russia has made significant advances in southern Ukraine and along the coast, but many of its efforts have become stalled, including an immense military convoy that has been almost motionless for days north of Kyiv.

Ukrainian President Voldymyr Zelensky rallied his people to remain defiant, especially those in cities that Russian soldiers have entered.

“You should take to the streets! You should fight!” he said on Saturday on Ukrainian television. “It is necessary to go out and drive this evil out of our cities, from our land.”

Mr Zelensky also asked the US and Nato countries to send more warplanes to Ukraine, though that idea is complicated by questions about which countries would provide the aircraft and how those countries would replace the planes.

Related: ‘It was a long night’ – BBC reporter Clive Myrie forced to flee from Ukraine