We are governed by a party of slogans, jingoism and bullsh*t. Boris Johnson is all furlough coat and no knickers. 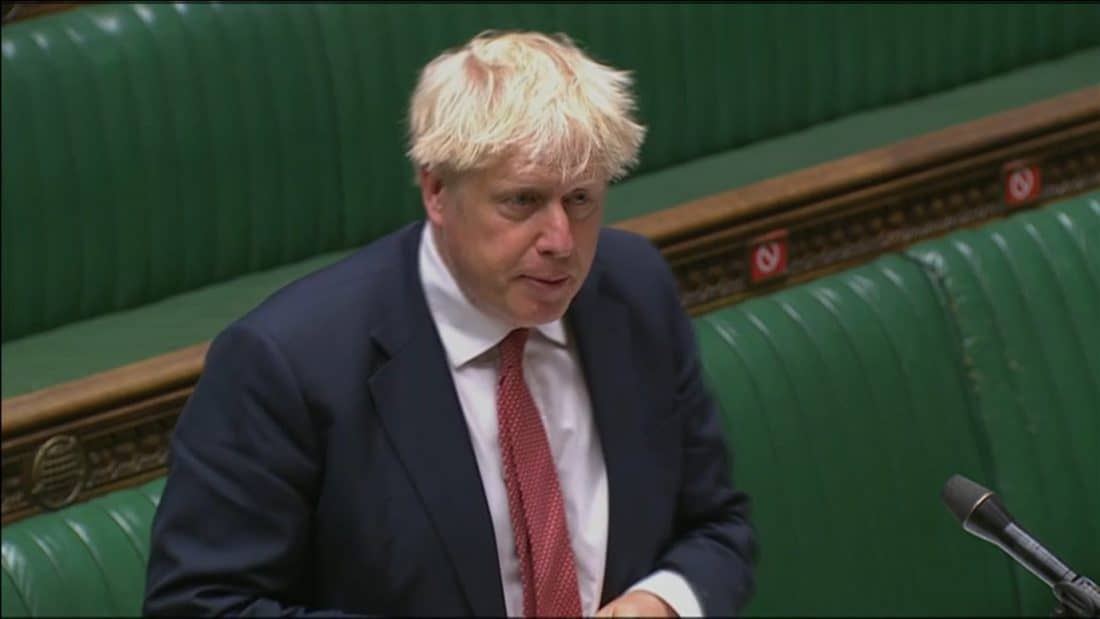 As first days back at school after the summer holidays go, Boris Johnson’s return to the House of Commons was akin to wetting yourself, calling your teacher ‘mum’ and eating paper all day – speaking from experience…sixth-form never really recovered from there.

The Prime Minister might have been wishing he was back in his yurt on the Scottish coast, where only midgies and tabloid snappers could nip at his heels at the cliff edge. He might have found more comfort were he to have been repeatedly hurled against the rocks by the freezing Atlantic squall than facing up to Sir Keir Starmer at PMQs this afternoon.

After a summer of U-turns, it was perhaps inevitable that proceedings focused squarely on the chaos of the past few months – from the A-level fiasco through to local lockdowns and back again.

But before we delve into the complete sh*tshow of our blustering leader’s showing at the despatch box, we should probably try and tot up how many U-turns there have actually been. The SNP’s Ian Blackford counted eight. Sir Keir put it at a dozen.

Either way there was another to add to the list by the time Johnson sunk back into the green benches, his sails not so much robbed of their wind as shredded by the spiky-haired ex-prosecutor sat across the aisle from him. Master and Commander this was not.

During PMQs, news broke of another volte-face. This time, the lockdowns put in place in Bolton and Trafford – whose leaders did not want restrictions lifted – have been reimposed. I would call it unbelievable but, with this Government at the helm it was anything but.

It was an admirable bit of tradecraft, sneaking out another embarrassing turnaround before Starmer had the chance to use it. The tactic’s efficacy was blunted, however, by the fact that Sir Keir already had an aircraft carrier’s worth of ammunition to hurl at the embattled Prime Minister.

“Even his own MPs have run out of patience,” Starmer noted gleefully. “They’re right, aren’t they?”

Sir Keir wanted to know when precisely Ofqual’s algorithm – the most roundly-criticised example of modelling since a group of women were sent down a Milan catwalk in blackface – would award an automatic A* to anyone lucky enough to study Latin, in a three pupil class, at boarding schools housed in the Home Counties.

As ever, Boris prevaricated, puffed out his chest, and panicked. He bizarrely accused Starmer – who literally worked with the PSNI – of being an IRA sympathiser. This is the same Boris Johnson who recently handed a peerage to Claire Fox, who defended the Warrington bombing and denied that the Bosnian genocide took place.

That the PM is still, months into a new (whisper it, popular) Labour leadership, reaching for his big book of Jeremy Corbyn insults should worry the braying backbenchers – particularly those in the once-fabled Red Wall.

Boris repeatedly refused to answer Starmer’s questions – prompting a terse intervention from the Speaker, Sir Lindsay Hoyle, who is proving that you do not need to be an attention-hungry, bellowing Bercow to command admiration in the chamber. The PM branded his opposite number Captain Hindsight – which is a bit like the Pope having a go at one of his flock for being Catholic. Starmer said the PM was ‘governing in hindsight.’

If this was an attempt, by Johnson, at some right-wing comedy to show the BBC how it’s done, I won’t be paying my licence fee. No wonder the Tories are so desperate to conjure up a culture war to detract from the flailing incompetence of their leader. 101 lazy right-wing jokes to throw at trained lawyers with a forward (to Barnard Castle) by Dominic Cummings is not going to fly off the shelves in the BBC on-line store.

Starmer stuck the knife in, with ‘I can’t believe it is Boris’ ease. “With this Prime Minister, it’s the same every time,” he said. “Pretend the problem doesn’t exist, brush away scrutiny, make the wrong decision, then blame somebody else.”

The only glimmer of hope was that there were so many questions about the furlough scheme – from all sides of the House – that surely it is the next U-turn on the slate. Who knows, maybe by the time you’re reading this Rishi Sunak will have followed the lead of the Irish, French and Germans and prolonged the programme until next year.

I wouldn’t count on it, though. The last thing the Tories want is for scroungers being paid by the Government to sit at home all day. Thatcher-esque unemployment figures are coming over the hill in October, but this time Boris won’t be able to blame miners and single mothers.

So, what do we make it then – is that 10 U-turns? 12? 14? Regardless, it was a depressing afternoon of lies, deflection and rapidly shifting sands. We are governed by a party of slogans, jingoism and bullsh*t. Boris Johnson is all furlough coat and no knickers.