With the UK having recorded the second highest death toll in the world, a Health Secretary who belittled a female MP who works in the Commons by day and an NHS emergency room by night, what could Boris possibly do to make things worse? Just be himself, I guess. 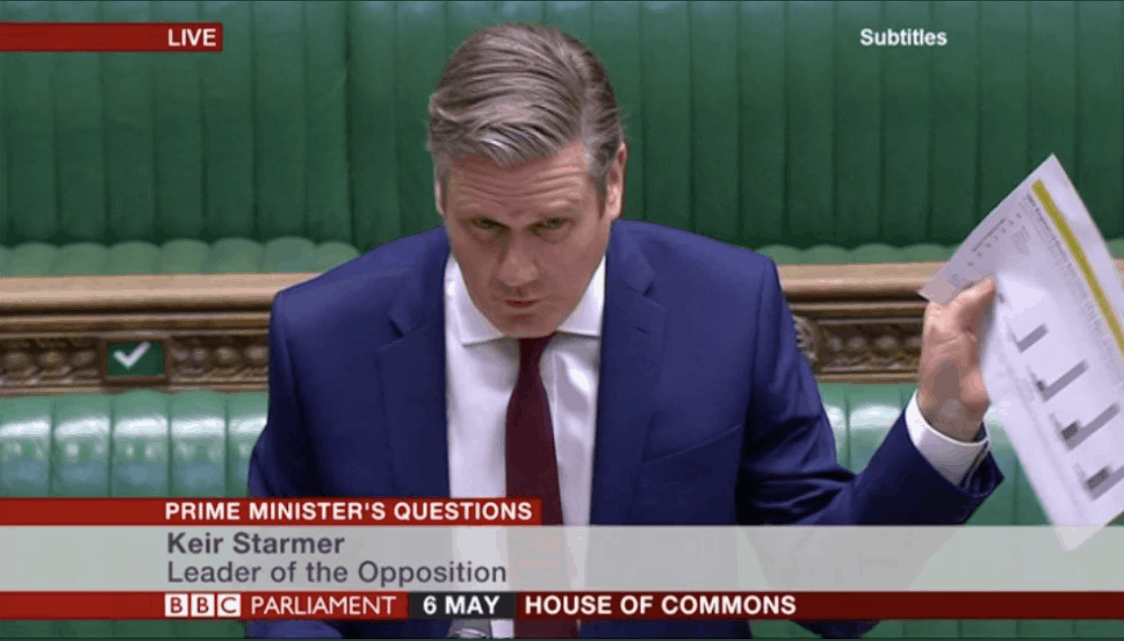 To paraphrase Morrissey, whose political views are not too out of kilter with today’s Tory government, there is a light – but it appears to have gone out.

It may have been the first time they had met at the dispatch box, but Boris Johnson was already punch drunk by the time he stepped into the ring – late – to face Sir Keir Starmer at PMQs today.

With the UK having recorded the second highest death toll in the world, a Health Secretary who belittled a female MP who works in the Commons by day and an NHS emergency room by night, what could Boris possibly do to make things worse? Just be himself, I guess.

The Prime Minister couldn’t even muster up a blustery faux pas or two, he looked instead like he has already given up. He wanted this to be like the London gig – a bike here, the odd bendy-bus there, a garden bridge and an airport that were never there at all.

We could put it down to the burdens of new fatherhood – something you’d expect him to be accustomed to by now – or his recovery from coronavirus. But his lack of pep feels like more of a long-term malaise, a depressing ultra-marathon than as opposed to a painful but short sprint.

Sir Keir served up questions – something  he pretty much failed to do last week – and nothing was returned, except garbled words. You can’t throw the towel in during PMQs, so Boris just had to retreat to the ropes and take a pummelling.

After it emerged that the UK has the highest death toll in Europe, the expertly-coiffed Labour leader wanted to know how it had come to this?

Boris retorted that every death was a tragedy, but warned that it wasn’t fair to compare other Britain with other countries.

At which point Sir Keir produced the receipts. He had carried with him to the chamber a printout from yesterday’s daily briefing slides, heavily disinfected we hope, showing that the government compares itself with other countries every single day. Next slide, please…

And so Boris slid into the corner of the ring, into a pit of despair. He said the aim was to save lives and protect the NHS, but there will come a time – perhaps soon – where we will all reflect on whether we might have taken a different direction. For a politician, especially one as adept at lying as him, it felt as good as a full admission of guilt.

Starmer then wanted to know why deaths in care homes had spiralled so devastatingly out of control. As Johnson said that wasn’t quite right, claiming that there has been a palpable improvement in recent weeks, the camera panned to Hancock – who nodded obediently.

So Sir Keir produced another slide – as a prosecutor, he knows there is nothing quite like getting beaten up with the gloves you lent the competitor – which noted that deaths in care homes are continuing to rise even as we are told that they are falling.

As Boris limped into the final round bloodied, scared and praying he can find another excuse so he can miss next week’s match-up, he was asked about the contention over the government’s 100,000 tests-per-day target.

The PM said that, actually, he is aiming for 200,000 a day by the end of May. Sir Keir, delighted to have such a claim on the record, was practically rubbing his hands with glee.

Johnson loves to channel to Britain’s wartime ethos, the spirit of the Blitz. In the lead-up to VE Day this, much to Boris’s disappointment, was a victory for the other side.

So, what did we witness in the sartorial stakes this week?

Sadly the main theme seemed to be a bunch of full suit and tie wan*ers praising Boris on the latest new addition to his family, perhaps in hope that a promotion might be in the offing.

Justin Madders (Lab)m Zoomed in with a vintage Labour campaign poster – from 1924 in fact – peeking out in the background. The speaker – who, unlike his predecessor, is not tolerant of nonsense –  told him off. Why a politician can’t have a political slogan I’ll never know. Glad they didn’t see the one of Maggie being hung off a bridge above his computer.

Ian Blackford (SNP) swapped his Hibernian shrine for a pair of tartan curtains – tasteful, I thought. Perhaps all part of a big Nat push to seem less sectarian?

And Mhairi Black (SNP) revealed herself to be the closest that the Commons has to a rockstar – she had two guitars in the background. Rock on.

Well, in the words of Morrissey, every day is like Sunday.