The machine extracts moisture from the air and converts it into drinking water. 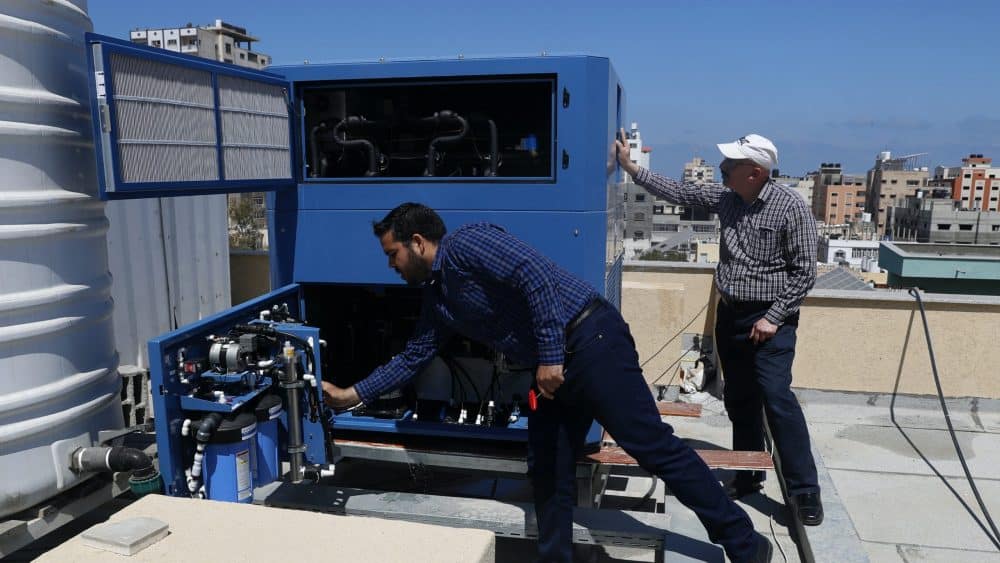 A Georgian-Israeli billionaire has found an innovative solution to the Gaza Strip’s chronic water crisis.

Michael Mirilashvili wants to deliver hundreds of generators that produce drinking water out of thin air.

His company, Watergen, sent a machine to a Gaza hospital last week in a rare case of Israeli-Palestinian co-operation in the Hamas-ruled enclave.

Gaza’s water situation is dire. Since the 2007 Hamas takeover of the crowded Palestinian territory, Gaza’s 2 million people have endured a crippling border blockade by Israel and Egypt that froze virtually all trade and most travel.

Gaza relies on an aquifer as its main source of potable water. But over-extraction has allowed sea water to seep in, rendering 97 per cent of the area’s water undrinkable.

Mr Mirilashvili told the AP news agency he wants to send more water generators to Gaza “because they are our neighbours and it’s a great pity to look at them suffering from such severe water shortages”.

He spoke days after one of his machines was installed on the roof of the Al-Rantisi Medical Centre in Gaza City.

Just a day after delivery, the generator, a large blue cube roughly the size of a vending machine, began producing cold, clean water for the hospital’s paediatric cancer ward.

Functioning like a dehumidifier, the machine extracts moisture from the air and converts it into drinking water.

The machine sent to the Gaza hospital is a medium-sized model and generates about 800 litres a day.

Drinking water to thousands of people

Watergen says its largest generators can provide clean drinking water to thousands of people. The company has also developed a new consumer version for home use.

Watergen’s technology was initially developed for military use in 2009, but it shifted gears to civilian markets after Mr Mirilashvili bought the company in 2017.

He donated the generator to the hospital after he was approached by Jerusalem-based Palestinian businessman Fayez Husseini, a former chief executive of Palestinian mobile phone company Wataniya.

Mr Husseini said for this project, Israeli authorities gave quick approval to move the generator across the border. Although there were no dealings with Hamas authorities in Gaza, he said he did not expect any trouble there either.

“I think both sides need to take electricity and drinking water off the table,” he said. “This should not be part of politics.”