Boris is a father, again, so Raab steps in, again, for their absentee PM. 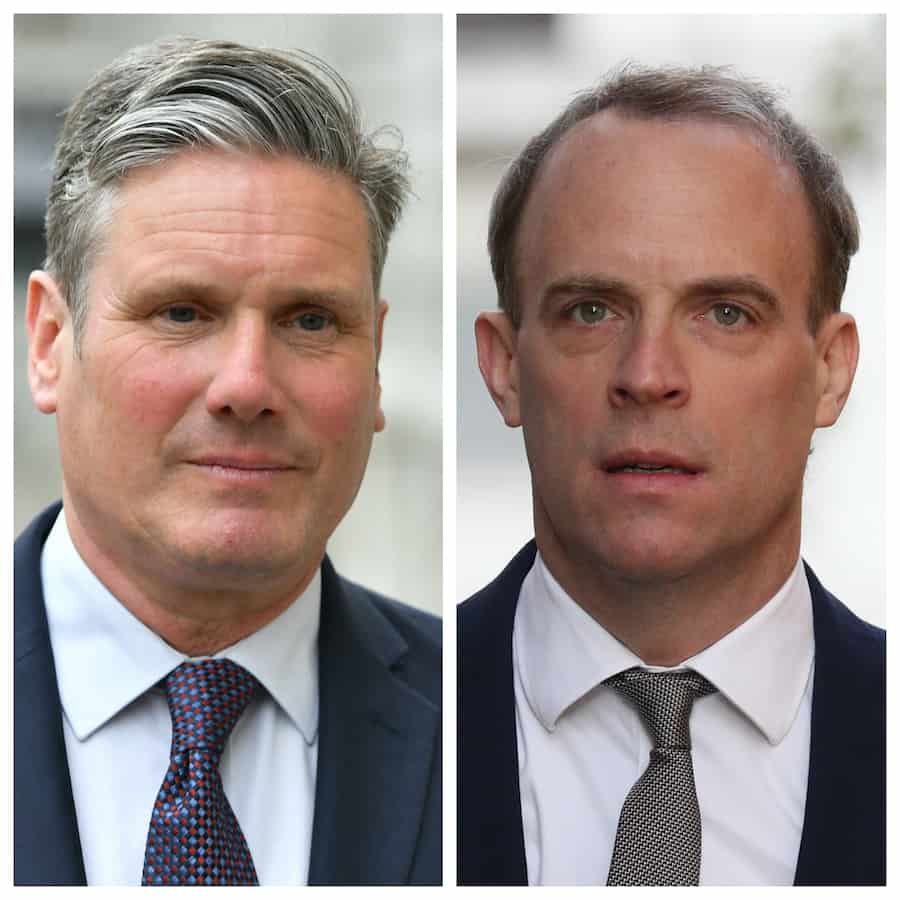 If PMQs keeps taking place without the PM, it might need a rebrand. Today saw the second virtual iteration of Prime Minister’s Questions and, once more, Boris Johnson had somewhere better to be.

His excuses for skipping both sessions are legitimate, in fairness. Nobody can truly begrudge him for missing his first encounters at the despatch box with the new Labour leader, Sir Keir Starmer, to continue his recovery from coronavirus and – today – to attend the birth of his and Carrie Symond’s first child.

However, one assumes he will have to face up to the opposition – and the public – at some point, though perhaps a distant aunt will die next Wednesday morning and prevent him from taking his place on the green benches once more.

I get the feeling being PM isn’t quite what Johnson was expecting. Maybe he will decide to give this fatherhood thing a real go this time and relinquish running the country. Given the number of offspring he is rumoured to have, and his approach to the job so far, it would probably end up being more of a full-time gig.

But for today Dominic Raab, the Foreign secretary, was once more sent in, to face down Sir Keir. Without the jeers of the braying mob on all sides (but, let’s be honest, more from the Tories) questions in the Zoom era of PMQs hang in the air with bit more menace, with Mark Francois unable to shout them down.

Unfortunately it seems that Sir Keir, eminent barrister though he is, temporarily forgot how to actually ask questions. What we got in their place were more like lengthy statements with a question mark stuck on at the end for good measure. Even the speaker told them to hurry up.

During a global crisis, a pair of Tory MPs demanded to know when an apparently essential cornerstone of British society would be restarted. Was it Schools? Non-critical operations, maybe? Even sporting occasions? Well, no. It turns out they both thought it urgent to know when garden centres and nurseries would be once more open for business.

Starmer was apparently unconcerned about buying a clematis. Instead, he wanted to know why the French, Germans, Welsh and Scottish all have presented their plan on how to exit lockdown, but we have not.

We have to listen to SAGE, Raab hit back repeatedly. We have to listen to the scientific evidence. Each time he mentioned this reassuringly-named committee I had a vision of Cummings rubbing his hands and manically laughing. Raab then asked Starmer to propose a timeframe, which seems a strange request seeing as, you know, he’s the government.

Neck on the line

Starmer wanted to know that the 20,000 deaths figure announced by scientists, as a ‘good’ figure, had been surpassed, and what the plan was from now on.

Despite scientists putting their neck on the line over this apparently arbitrary figure, the government still won’t provide us with plan – never mind a date on which lockdown might be eased.

Sir Keir then wanted to know why, with care home deaths on the rise, the government hadn’t acted sooner? Anyone with a bit of sense could have foreseen care homes – essentially clusters of elderly, vulnerable people – were a disaster waiting to happen.

Raab responded that the challenge in the care home sector is that it is decentralised, and staff, friends and family come and go seemingly at random. But if Downing Street was able to shut the entire country down, why couldn’t it do the same for care homes?

So to the thorny issue of PPE. Starmer wanted to know why a quarter of doctors surveyed by the Royal College of Physicians said that the PPE had become more scarce. Raab didn’t really have an answer.

Sir Keir then quizzed Raab about testing, or the lack of it. As ever, the government appeared to shift the blame onto NHS workers for not using the testing sites, and didn’t foresee its glitzy new website crashing. If you have symptoms of this deadly virus, driving 100 miles to a test centre is unlikely to be something you feel like doing.

It seems like the government is two steps behind everyone else in this crisis, but is still willing to point the finger of blame at anyone except themselves.

Now, for a bit of light relief, the part of virtual PMQs I really enjoy is peering in on MPs at home. It feels like seeing your Geography teacher in Safeway when you were in year 8.

So, what delights were there this week?

Well the high number of full suit w*nkers was galling. C’mon lads, get in your ath-leisure wear like everyone else. Ian Blackford (SNP) is a massive Hibs fans, but not as much as Alison Thewliss (SNP) loves the books of Jo Nesbo. She also appeared to have a crystal skull on her shelf – worrying.

On brand as ever, Sir Geoffrey Donaldson (DUP) has hung numerous pictures of the Royal Family on his wall, alongside a statue of Churchill and, I think a mini replica of St Paul’s. He must really love Britain.

Even in these troubling times, there were some crumbs of comfort. An overcompensating Unionist politician, delusional Tories who want to spruce up their duck ponds and Boris Johnson having another sprog. It was virtual but it almost felt like the good old days.