Johnson was defiant after a Labour MP told him he is "loathed" by his own party. 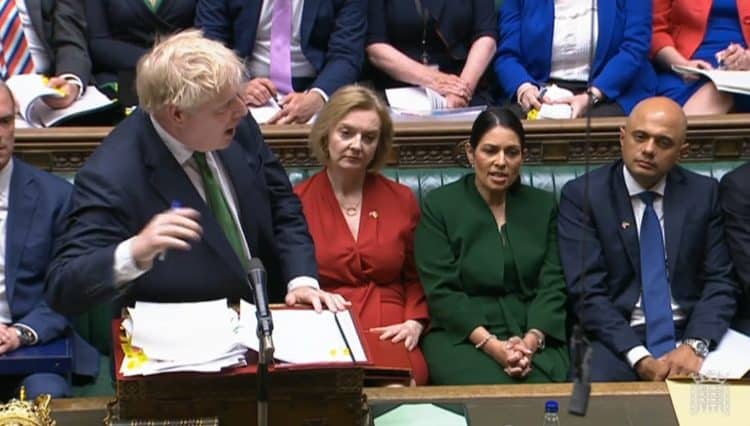 Boris Johnson defiantly told MPs he will fight to stay in power, claiming that his political career has “barely begun”.

In his first Commons appearance since surviving a no-confidence vote launched by his own rebellious MPs, the prime minister was told he is “loathed” by his own side.

But Johnson vowed that nothing “is going to stop us getting on delivering for the British people”.

Angela Eagle, a senior Labour MP, told him at PMQs: “This week’s events have demonstrated just how loathed this prime minister is – and that’s only in his own party.

“As his administration is too distracted by its internal divisions to deal with the challenges we face, can the prime minister explain if 148 of his own backbenchers don’t trust him why on earth should the country?”

Johnson hit back: “I can assure her in a long political career so far – barely begun – I’ve of course picked up political opponents all over.

“And that is because this government has done some very big and very remarkable things which they didn’t necessarily approve of.

“And what I want her to know is that absolutely nothing and no-one, least of all her, is going to stop us with getting on delivering for the British people.”

Later, Keir Starmer accused Johnson of being “utterly unable” to improve the NHS, warning: “24 Hours in A&E used to be a TV programme, now it’s his policy.”

The Labour leader opted to focus his attacks at PMQs on problems within the health service rather than on Johnson’s leadership woes.

Speaking in a raucous House of Commons, Johnson at one stage advised Sir Keir: “This line of attack is not working.”

Opening the exchanges between the pair, Sir Keir responded to the noises heard as Johnson entered the chamber by saying: “I couldn’t make out whether that introductory noise was cheers or boos.

“The trouble is I don’t know whether it is directed at me or him.”

“Booze in Durham,” a Conservative MP called back, a reference to an investigation into a gathering during lockdown involving the Labour leader.

Keir on the attack

After Sir Keir highlighted unhappiness among patients with GP services, he said: “The prime minister’s ‘big plan’ act is so tired that even once-loyal MPs don’t believe him, and it’s not just waiting for a GP – it’s waiting for all NHS treatment.”

He went on to raise concerns over patients being put at risk by a “failure to fix wanting and inadequate” NHS buildings, a line of attack Johnson labelled “satirical” before arguing: “Attacking our hospital building programme, when they were the authors of the PFI scheme that bankrupted so many hospitals.”

“They want him to change but he can’t. As always with this prime minister, when he’s falling short he just changes the rules and lowers the bar.

“In March, he proposed changing the NHS contract – he wants to double the length of time patients can be made to wait for surgery – from one year to two years.

Related: Tories accused by MPs of wasting billions on ‘levelling up’