"I prosecuted terrorists and I prosecuted extremists," said Starmer. "I bought dodgy water canons, my vegetative bridge was vegetative & I escaped on holiday to avoid a damning Covid report", the PM should have replied. 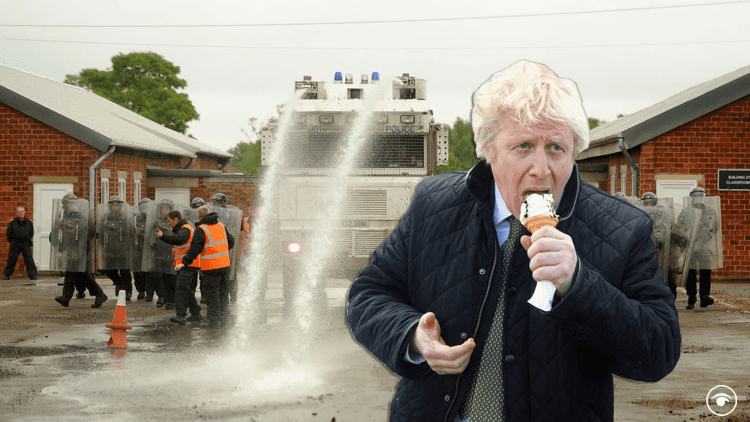 It was a sombre atmosphere in the chamber for today’s PMQs. The killing of Sir David Amess last week brought a dark cloud over Westminster and beyond.

However, that didn’t seem to stop Priti Patel from smirking her way through a large portion of the session.

Sir Keir Starmer spoke in a collegiate manner and Boris Johnson did his best to keep away from his usual master class of not answering questions and sniping at the Labour benches.

He couldn’t help himself though and did try and push the conversation back into the bear pit of politics, to which Starmer replied “Really?… After the week we’ve had, I really don’t want to descend to that kind of knockabout.”

Talking sensibly about politics really isn’t Johnson’s thing, a collegiate approach is not what he signed up for. He yearns for chaos and division.

Showman with no show

The PM is a showman and with no show he was unmasked (in more than one way) as a trivial man.

Even Ian Blackford was muted, literally, as he seemed to have a very sore throat. I thought the idea was to stay at home these days if you are unwell?

Blackford was followed by Tory MP Anthonyn Mangall who said: “It’s always a pleasure to follow the honourable gentlemen and the new quiet man of British Politics. Long may it continue,” which promoted guffaws from the Tories.

They probably think you can’t have a collegiate approach with barbarians from the north.

The issue of social media and online abuse was raised which both leaders agreed directly or indirectly lead to terrorist incidents.

“I prosecuted terrorists and I prosecuted extremists,” Starmer told the house. “I bought dodgy water canons, my vegetative bridge was vegetative and I went on holiday when a report into Covid mishandling was released,” the PM should have retorted.

However, “closing down anonymous accounts would not have prevented the murder of Jo Cox, nor PC Keith Palmer… nor Sir David Amess,” admitted Starmer.

Nobody mentioned the Daily Mail’s ‘crush the saboteurs’,  ‘enemies of the people’ or numerous other headlines raising anger towards migrants.

How do we not know that these themes are then taken online where they are amplified?

What can the Government really do to deal with this, you wonder.

Is the internet, like our national debt, just too big? Better to just leave it to tick along steadily and hope someone else tackles it.

Starmer had some suggestions, he wants execs of social media to be criminally liable for failing to tackle extremist material on their platforms. That idea appeared to be moved directly into the trash by the PM.

The one policy Johnson pledged was to improve street lighting and more CCTV cameras as part of efforts to help women feel safer on the streets at night.

You feel this is to make it easier to catch the perpetrators after their crimes rather than a long term strategy to deal with the epidemic of violence against females.

With the UK’s weekly death rate three times the level of other major European nations it was surprising that Covid never got raised. Neither was the fact that Rishi Sunak is about to slash tax surcharge on bank profits while refusing to reverse the Universal Credit cut.

These are things we could deal with today, or even more imminently, Tory MPs could wearing a mask?

Failing that maybe the PM could at least recommend a decent babysitter for the festive period. Nimco Ali, perhaps?