He basked in the glory of England’s performance in the Euros and tennis star Emma Raducanu. Well, the rest of us remember the government slamming players taking a knee - and would Radacanu’s family make it past Priti Patel’s new border regime? 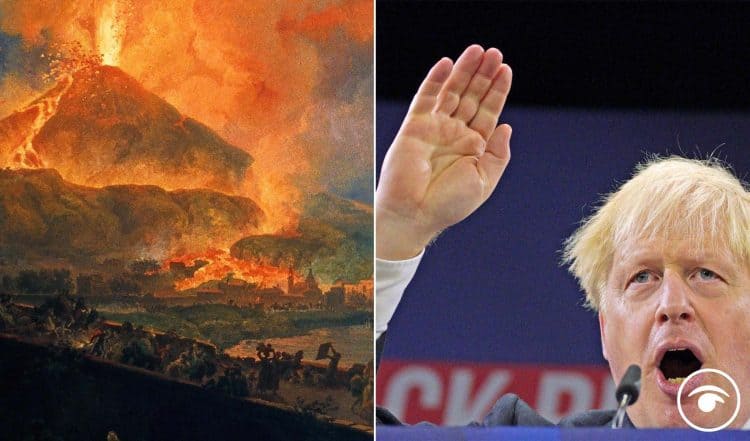 “But if you close your eyes, does it almost feel like nothing changed at all?” sang pop group Bastille, on their hit single Pompeii.

Boris Johnson seemed to following the band’s advice word-for-word as he addressed Tory conference in Manchester on Wednesday. Just don’t look out the window, you can’t see the lava coming your way if you pretend it’s not there.

Skills, skills, skills is our prime minister’s mantra. A high-skilled, high-paid economy. The problem is that we’ve run out of baristas, abattoir workers and HGV drivers. Are those the sorts of jobs Jonson means? Unlikely. Even if we do all manage to land so-called highly-skilled jobs, we still need these people. Someone has to drive white goods to Skelmersdale.

He prattled on about the investment into the NHS, it barely raised a ripple of applause. How many people in that room want to see it privatised? The only cheer for the NHS was for a new electronic system for patients records to cut red tape and needless bureaucracy. Woo-hoo. New government IT systems have a notoriously terrific track record of success. Plus they stick all your details in one file – must be music to the ears of US private healthcare providers.

Johnson speech praised the bankers and the biggest cheers was for “capitalists” who beat Covid. And here I was thinking it was the NHS. Just keep those eyes tightly shut and you will believe anything.

The PM did find time to have a go at ideas thought up in fictitious “powder rooms of north London dinner parties” – maybe Michael Gove could help him out about what actually happens at those soirées? Warming to his theme, he then had a pop at Islington lawyers, forgetting, perhaps, that he used to live in a £3.75m Islington townhouse with his ex-wife… who was a lawyer.

Did he mention any of the flurry of issues currently grinding the country to a halt? Let’s check. Fuel shortages? Nope. Empty supermarket shelves? Nada. Mass pig culling and farm staff shortages? Come off it. What about the fact that his government has, just this morning, enacted the biggest overnight benefits cut since the Second World War? Nothing.

The world described by the prime minister this afternoon was a picture postcard one – something that only truly exists in the imaginations of he and his cronies Cabinet.

He had gall to bang on about levelling up – whatever it means, we’re still none the wiser – hours after plunging millions of children into poverty and robbing households of over £1,000 a year. He even asked the crowd to fist bump each other, to congratulate the Tories on a job well done. If this is them on a good day I’d hate to see them have on a bad one.

As expected the bulk of the speech had no policies and was full of nonsense slogans. A non-exhaustive list of things mentioned: monkey glands, ‘build back beaver’, ‘build back burger’, royal jelly, Stoke Poges and – of course – as much Winston Churchill as he could cram in.

Towards the end he basked in the glory of England’s performance in the Euros and tennis star Emma Raducanu. Well, the rest of us remember the government slamming players taking a knee – and would Radacanu’s family make it past Priti Patel’s new border regime?

By the speech’s end, only one thing was really clear: Johnson was auditioning for the job he really covets – entertaining dead-eyed businessmen at after-dinner drinks do’s, the oldest profession in the book for a washed-out, out-of-office prime minister.

For the watching public? Inflation is rising, taxes increasing and benefits being cut. The utopian future of a high-skilled, high-wage economy is as close to most of the population as Johnson is to reality.

Which brings us back to Bastille’s hit track…“How am I gonna be an optimist about this?”