Just 22 per cent of respondents said they had a more positive view of Johnson as a result of his response to Russia’s invasion of Ukraine. 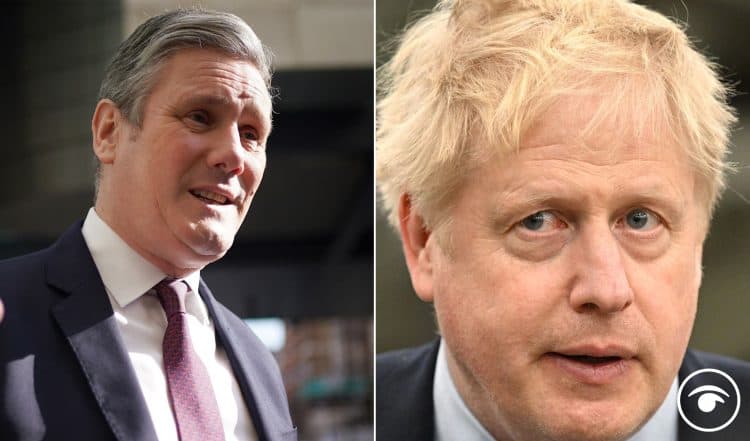 Sir Keir Starmer has all but withdrawn his previous calls for Boris Johnson to resign as he said the country needs “unity” in the face of Russia’s invasion of Ukraine.

However, exclusive polling for the New Statesman by the polling company Redfield & Wilton Strategies reveals that a majority, 54 per cent, said that they believed Boris Johnson should resign as Prime Minister, while 35 per cent believed he should stay.

Two thirds (66 per cent) said that his response to the war had not changed their view. Just 22 per cent of respondents said they had a more positive view of Johnson as a result of his response to Russia’s invasion of Ukraine, whereas 12 per cent had a more negative view.

The Labour leader said there was still “a basic question of trust” in the Government, but that for now the Prime Minister was “concentrating on the job in hand”.

He said: “I do think there’s a basic question of trust (in the Prime Minister) and it does seem a long time ago now we were talking about all of the allegations that Prime Minister faces.

“Of course, he is still being investigated by the Metropolitan Police. I do think there’s an issue of trust.”

The Metropolitan Police are investigating 12 alleged breaches of coronavirus restrictions over eight dates where parties or gatherings have been reported across Downing Street and Whitehall.

Sir Keir appeared to have put his calls for the Prime Minister to resign over the partygate saga on hold for now.

“I’m very clear as the leader of the opposition, leader of the Labour Party, that when it comes to standing up to Russian aggression, and standing in support of Ukraine, it’s very important in the United Kingdom and in our politics that we show the world that we’re united and, therefore, whatever the challenges and frustrations and criticism I have of the Prime Minister, and I’ve got many on this issue, there is unity, and it’s very important that we demonstrate that unity,” he said.

When asked if he would therefore withdraw his call for Mr Johnson to resign immediately, he said: “Look, at the moment the Prime Minister is obviously concentrating on the job in hand and we stand united as the United Kingdom on that issue.”

He told ITV News: “In a time like this, it’s very important that the public have trust in their leaders. But I can tell you in the debate in Parliament tomorrow, we won’t be talking about partygate.

“We will be absolutely focused on the amendments that we need to pass to toughen up the sanctions regime. So, our challenge to the Government tomorrow is to go further and to go faster on this.”

A Labour source later added: “Our position is unchanged, we haven’t withdrawn our call for Boris Johnson to resign.”

Shadow defence secretary John Healey said it was right to set aside calls for the Prime Minister’s resignation.

“Those hard, underlying questions that ultimately Boris Johnson will have to return to answer about his law-breaking, about the parties in Downing Street, the police investigations will come back,” he told Times Radio.

“But for now we must stand with other European nations and Labour gives its full backing to the extent the Government will stand by and support the Ukrainians’ resistance in Ukraine against the Russian invasion, and the toughest possible sanctions to help isolate and cut Russia out of the international system.”

Sir Keir said his party supports the Government but he wants to see them going “further and faster”.

He told ITV News: “Everybody understands why we can’t have a no-fly zone, why direct military assistance is not possible. That means sanctions have to be the strongest we have ever seen, the most effective we’ve ever seen. And in order for sanctions to work, you need to know what property the oligarchs have got here in the United Kingdom.

“At the moment, the Government is saying that they will have to register that ownership but they’ll have six months to do that. Now, our concern is that in that six months, there’s time to sell property and therefore it’ll never be registered, never be sanctioned.

“That should be 28 days. So, I want to push the Prime Minister much further than that and we’ll be trying to do that tomorrow.”

Sir Keir said there is also another area where the Government could move.

He added: “That is in relation to those oligarchs who have been using our courts to suppress critics and challenges, expensive legal cases that close down challenge and free speech.

“We want to see the Government go much further there. There’s going to be an amendment tomorrow in Parliament.”

The Labour leader added: “So, yes, we support what the Government is doing, but we do think they could go further and faster, and we are going to be pushing them to do that tomorrow on that issue.”

Related: Labour slammed for selecting ex-head of Orange Order as video of him saying ‘no surrender’ emerges