Business leaders said improved trade between north and south would "inevitably put pressure on the Union". 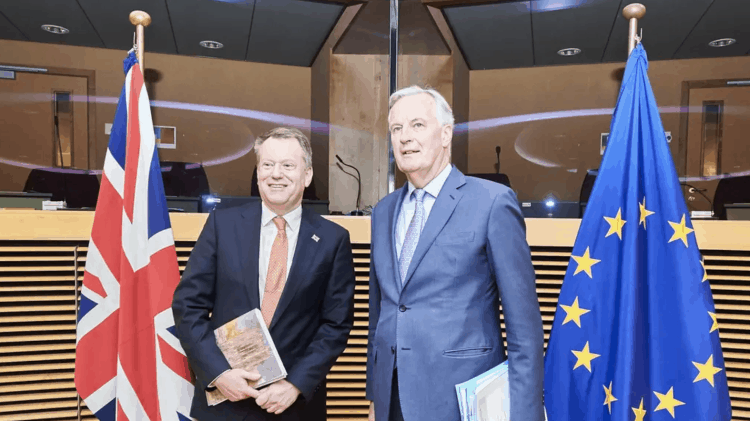 Brexit minister David Frost has admitted trade between Northern Ireland and Ireland has gone up since Brexit – but suggested it cannot keep benefitting from the EU’s single market, as this would hurt the UK.

Speaking on Policy Exchange’s Brexit Panel on the fringes of Tory party conference, Frost admitted supply chains are being “reordered quite quickly” and trade between Northern Ireland and the Republic has increased in both directions based on both British and Irish figures.

Frost’s comments came as Martin McTague, policy and advocacy chairman at the Federation of Small Business, warned the post-Brexit Irish trade success will “inevitably” weaken the links with Britain and “put pressure on the Union”.

“What would worry me is that you get a sort of two-speed UK where different things are going to happen in Northern Ireland to the rest of Great Britain,” McTague added.

Dr Gerard Lyons, senior fellow at Policy Exchange, said that regardless of one’s politics, “incentives do work” in economics.

He suggested Irish businesses are incentivised to collaborate north-south rather than with the rest of the UK, which is hitting Britain’s economy and will continue to do so if Westminster does not drag Northern Ireland away from the new system.

The panel discussion sparked a lot of reactions, with writer and broadcaster Gavin Esler noting the Brexit deal signed by Frost is now something Frost wants to change.

“Fascinating that Northern Ireland being effectively in the Single Market and Customs Union – as agreed by Lord Frost – is working so well it must be stopped,” Esler said.

And Ireland’s Future, an organisation campaigning for new constitutional arrangements away from Britain, said on Twitter: “This is one of many reasons why the government in Dublin and the Executive in Belfast should be jointly preparing for a unity referendum.

“The economic fortunes of the people here, north and south, do not matter to the London government. People in Ireland must be allowed to choose their own destiny.”

German MEP Anna Cavazzini also added to the debate, saying: “The NI Protocol is a chance for Northern Ireland, and that is unacceptable to Brexiters. Companies based in NI have access to the UK market, and to the EU single market.

“This unique position already protected NI from the worse of the Brexit food and fuel chaos.”

Related: Brexit minister says the UK is ’embarked on a great voyage’