It comes after Nadine Dorries called on MPs conducting the inquiry to ‘quit the witch hunt’. 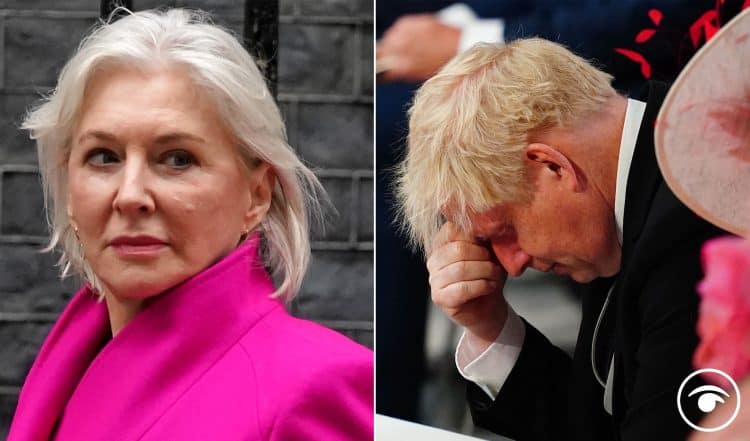 Downing Street has signalled that it remains committed to assisting a parliamentary inquiry into whether Boris Johnson lied to MPs over lockdown parties in No 10.

Leading allies of the Prime Minister have attacked the investigation by the Commons Privileges Committee denouncing it as a “witch hunt”.

Culture Secretary Nadine Dorries said it represented the “most egregious abuse of power” while environment minister Lord Goldsmith said the committee was “clearly rigged” against Mr Johnson, despite having a Tory majority.

It follows reports that a number of the committee members – including some of the Conservatives – have made public comments critical of Mr Johnson’s conduct during the “partygate” scandal.

However, the Prime Minister’s official spokesman said No 10 stood ready to assist the committee in its inquiries – and could continue to do so after Mr Johnson leaves office next month.

“There is a process for this. We will respond to the Privileges Committee in their work in due course. We want to look at this properly and abide by the process,” the spokesman said.

“This is something Parliament voted for. We will assist the committee in their inquiries so they can bring it to a conclusion.

“We would expect the committee to abide by the rules in that circumstance.”

The Downing Street parties, in breach of Covid rules, were among the scandals that forced Mr Johnson’s resignation as Tory leader.

The committee’s investigation threatens to further tarnish his legacy and could impact his future as the MP for Uxbridge and South Ruislip.

If he is found to have lied to Parliament, Mr Johnson could face a suspension from the Commons for 10 or more sitting days and a recall petition, which, if signed by 10 per cent of his constituents, would trigger a by-election.

The MPs on the committee intend to call Mr Johnson to give oral evidence in public in the autumn, under oath.

The Prime Minister’s spokesman meanwhile has defended Mr Johnson’s holiday with his wife, Carrie, in Slovenia amid criticism he was “missing in action” during the cost-of-living crisis.

“I think the public understand that it is not unusual for the Prime Minister – for ministers – to take some time off during the summer recess,” the spokesman said.

The spokesman said the trip had not involved the use of taxpayers’ money, but declined to say whether Mr Johnson – who is now back working in Downing Street – had paid for it himself.

“No taxpayers’ money was used for this. This was a private holiday. Any declarations will be made if required,” the spokesman said.