“I know ministers have a busy life, but I guess you’d hope that the education secretary would do his homework.” 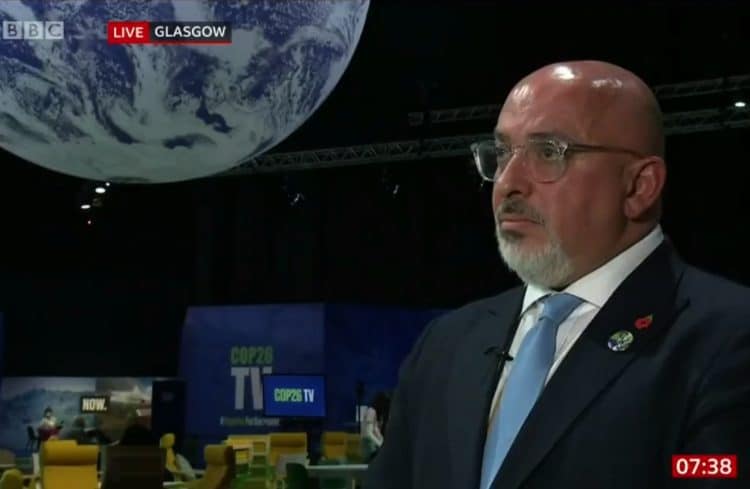 Education Secretary Nadhim Zahawi has admitted he had not read the detail of a standards report into Tory MP Owen Paterson but said he takes “collective responsibility” for the Government having “conflated” his case with the desire for wider reforms.

Mr Paterson, who had represented North Shropshire since 1997, resigned on Thursday after a 24-hour debacle where he was saved from potential suspension by Tory colleagues after being found to have breached lobbying rules, only to face a fresh vote when the Government made a U-turn following allegations of sleaze.

The Government had backed an amendment put down by the former Leader of the Commons, Dame Andrea Leadsom, which would have prevented Mr Paterson’s immediate suspension by launching a review of the entire disciplinary system.

The controversial plan was backed by almost 250 Tory MPs on Wednesday, although there was a sizable rebellion and by Thursday morning the Government was forced into an embarrassing U-turn, blaming a lack of cross-party support.

“I actually haven’t read the report”

But Mr Zahawi admitted on Friday that he had not read the detail of the report into Mr Paterson’s conduct, despite voting for the amendment which saved him from suspension on Wednesday.

Asked on BBC Breakfast who was right in the row, after Mr Paterson reasserted that he was innocent, Mr Zahawi said: “I actually haven’t read the report.”

Mr Paterson has said the standards process neglected to take evidence from witnesses who would have supported his cause.

“You’d hope the education secretary would do his homework”

Labour MP Chris Bryant, the chairman of the Committee on Standards, said every MP had been emailed urging them to read the report.

He told the PA news agency: “I know ministers have a busy life, but I guess you’d hope that the education secretary would do his homework.”

He added: “What this really underlines is that it’s best if governments stick out of independent disciplinary processes.

“I think it’s been a terrible week really for Parliament and an awful lot of reputations have been unnecessarily tarnished.”

Despite Mr Paterson quitting rather than face the prospect of being suspended from Parliament for 30 sitting days, MPs are set to hold an emergency debate on Monday on the consequences of this week’s events in the Commons.

“The reputation of the House of Commons as an institution and MPs of all parties will have been damaged by the events of the last 24 hours.”

The former MP also said the affair has “weakened the Government”, making it harder for Boris Johnson to win support from backbench MPs on potentially unpopular measures in future.

“If you ask your troops to march through the lobby on something like this, and which they don’t think is right, and then you U-turn on it, it’s going to be more difficult next time around,” he said.

But Mr Zahawi insisted the focus had always been on creating a system of appeal for MPs found to have committed wrongdoing, and said it had been a mistake to conflate Mr Paterson’s case with wider reform.

“Conflating that with the particular case of Owen Paterson was a mistake and I think the Leader of the House, Jacob Rees-Mogg, came to the House yesterday, upon reflection yes it was a mistake, and I think it was right to come back very quickly to the House and say we need to separate these things out.”

“Lobbying is not allowed”

He told Sky News: “The Prime Minister has always been very clear that paid lobbying is not allowed.

“The mistake is the conflation of creating a fairer system with the right of appeal for Parliamentarians to be able to put forward an appeal process.

He told LBC: “I also think, by the way, part of possibly where these things, where you do make a mistake, is the sort of human factor, is the compassion.

“There’s a family here that’s lost a mother through suicide, and Owen himself has been devastated by this, and I think if you take it in the round, we’re all human beings.”

Mr Paterson had a comfortable majority of almost 23,000 in North Shropshire and the circumstances of the by-election that will now take place have led to claims the opposition parties could unite behind a single anti-sleaze candidate, although Labour sources insisted no “official” talks had taken place.

Mr Paterson faced a vote on his suspension after he was found to have repeatedly lobbied ministers and officials for two companies paying him more than £100,000 per year.

He had always maintained his innocence but said he was resigning because “I am unable to clear my name under the current system” and due to a desire to spare his family any more suffering – Mr Paterson’s wife took her own life in 2020.

Mr Johnson said he was “very sad” that Mr Paterson was standing down after a “distinguished career”.