He also had some advice for the UK Government. 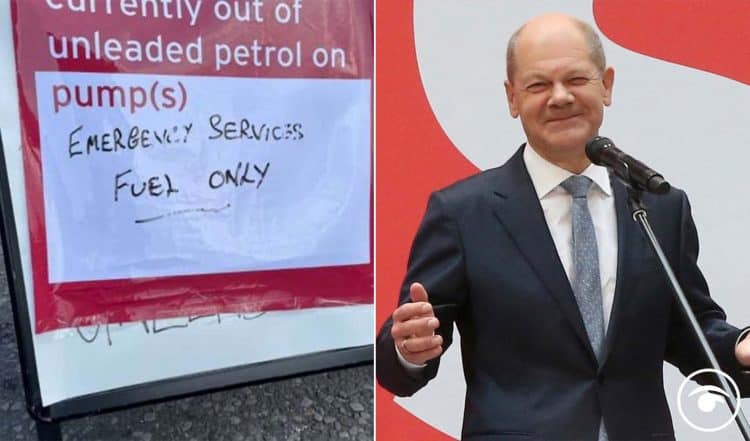 The man who is most likely to replace Angela Merkel as Germany’s chancellor said the truck driver shortage hitting the UK is a consequence of Brexit and low wages.

In a press conference, Olaf Scholz was asked by a British reporter about the chaos disrupting British supply chains.

“The free movement of labour is part of the European Union,” he said.

“We worked very hard to convince the British not to leave the union. Now they decided different and I hope they will manage the problems coming from that.”

He then followed up with some advice for the UK government, Mr Scholz, said: “It might have something to do with the question of wages.

“If you understand that being a trucker is really something that many people like to be and you find not enough, this has something to do with working conditions and this is something that has to be thought about.”

The party that narrowly beat outgoing German Chancellor Angela Merkel’s bloc was pushing for a quick agreement on a coalition government amid concerns that Europe’s biggest economy could experience weeks of uncertainty after an election that failed to set a clear direction.

Olaf Scholz, the candidate for the centre-left Social Democrats, called for Mrs Merkel’s centre-right Union bloc to go into opposition after it saw its worst-ever result in a national election.

Both finished with well under 30 per cent of the vote, and that appeared to put the keys to power in the hands of two opposition parties, raising questions over the stability of a future government.

During her 16 years in office, Mrs Merkel was seen abroad not just as Germany’s leader but in many ways as the leader of Europe, helping steer the European Union through a series of financial and political crises.

The unclear result combined with an upcoming French presidential election in April creates uncertainty — at least for now — in the two economic and political powers at the centre of the EU, just as the bloc faces a resurgent Russia and increasing questions about its future from populist leaders in eastern countries.

Both outgoing finance minister and vice chancellor Mr Scholz and Armin Laschet, the Union’s candidate and governor of North Rhine-Westphalia state, staked a claim to leading the new government on Sunday night.

Mr Scholz, who pulled his party out of a long poll slump, sounded confident on Monday.

But the kingmakers are likely to be two prospective junior partners in any coalition, the environmentalist Greens and the business-friendly Free Democrats.