Chancellor Kwasi Kwarteng appeared to be reversing one U-turn as the PM suggested she could one day cut the top rate of income tax. 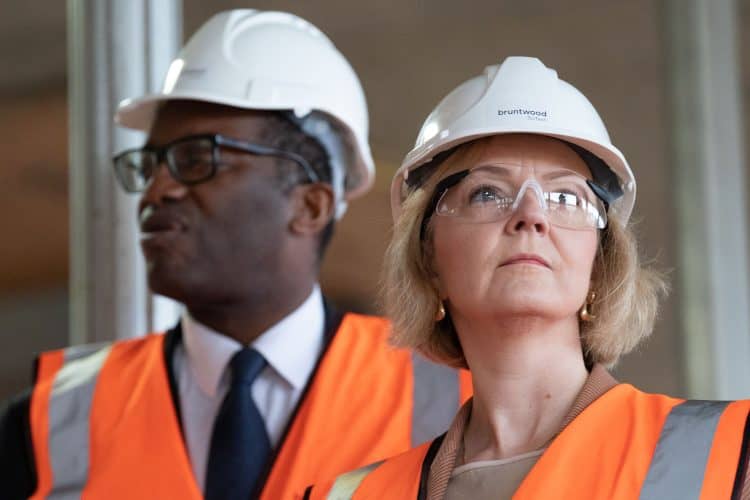 Liz Truss was struggling to maintain Cabinet discipline as she hinted she could still slash income tax for the highest earners just a day after U-turning to stave off a Tory revolt.

In signs of fresh tensions, Chancellor Kwasi Kwarteng backed down from considering another U-turn by now ruling out bringing forward his medium-term fiscal plan.

Members of the Cabinet were publicly urging the Prime Minister to raise benefits in line with inflation and questioning her climbdown on the 45p rate for earnings over £150,000.

Commons Leader Penny Mordaunt, another former leadership contender, said it “makes sense” to increase benefits in line with soaring inflation rather than deliver a real-terms cut.

Ms Truss is instead considering a raise in line with the far lower figure of earnings, but said she would not be sacking Ms Mordaunt for publicly stating her firm stance.

The Prime Minister scrapped her plans for a tax cut for the wealthiest on Monday, saying it had become a “distraction” as senior Tories threatened to vote against it in the Commons.

However, on Tuesday she revealed in an interview at the Birmingham conference that she harbours a possible ambition to bring back the controversial tax cut in the future.

“I would like to see the higher rate lower. I want us to be a competitive country but I have listened to feedback, I want to take people with me,” she told the BBC.

“I’m not contemplating that now, I’m very, very clear that we’ve listened to people about what their priorities are.”

At the same time, her Home Secretary vented her frustration at the U-turn, hitting out at Conservative MPs including Michael Gove who “staged a coup, effectively, against the Prime Minister”.

“I’m disappointed about the subsequent reversal but I accept their reasons,” she added, during the recording of a Telegraph podcast.

Meanwhile, there was confusion over another apparent reversal from Mr Kwarteng after he told the conference he would publish his fiscal plan and Office for Budget Responsibility forecasts “shortly”.

His allies had been hinting this meant bringing the publications forward from November 23 to this month.

But Ms Truss told GB News that the originally planned date is “when we’re going to set out the OBR forecasts but also our medium-term fiscal plan”.

Downing Street aides said only that the PM may consider bringing the date forward, downgrading the likelihood of the move.

Then, in a separate GB News interview, Mr Kwarteng denied he was changing his plan, saying “shortly is the 23rd” and suggesting people had been “reading the runes” incorrectly.

Earlier, Ms Mordaunt joined backbench rebels in calling for welfare payments to be raised in line with inflation, which has been at around 10 per cent, rather than earnings at 5 per cent.

“I’ve always supported, whether it’s pensions, whether it’s our welfare system, keeping pace with inflation. It makes sense to do so. That’s what I voted for before and so have a lot of my colleagues,” she told Times Radio.

Ms Truss faced questions over whether her Commons Leader had to go in order to enforce discipline in her ranks, but she told ITV News: “No, she doesn’t.

“This is about a decision that we are taking later on this year.”

The Prime Minister has instead been stressing she must take a “responsible” approach to the public finances, refusing to rule out benefits cuts or a return to austerity.

Benefits are usually uprated in line with the consumer price index (CPI) rate of inflation from September, with the rise coming into effect the following April.

The Institute for Fiscal Studies estimates that each percentage point rise in CPI adds £1.6 billion to welfare spending.

Former Cabinet ministers Mr Gove and Damian Green have already spoken out with concerns about any failure to raise benefits in line with inflation.

Mel Stride, Tory chairman of the Treasury Select Committee, said he would have to “think long and hard” if asked to vote to increase benefits in line with earnings rather than inflation.