"These adverts claim that British business is going from strength to strength.... and ignores the alarm bells they have been sounding", the letter reads. 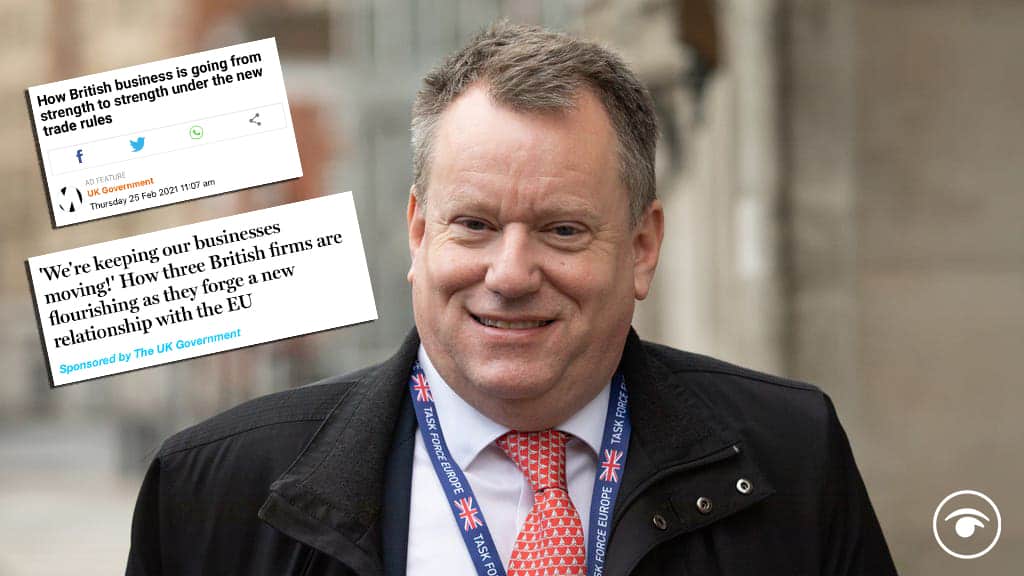 Labour has asked the government to disclose how much it spent on advertorials in several national newspapers suggesting trade is going smoothly post-Brexit.

According to reports in Politics Home shadow cabinet officer minister Jack Dromey has asked his counterpart, David Frost, to reveal how much money went on sponsored ads in publications such as the Daily Mail, Metro and The Sun which sought to promote the “apparent success of UK businesses in adapting to the new trading arrangements with the EU”.

As several businesses struggle to get to grips with the new rules Dromey said the articles showed “great disrespect [to] the many businesses who feel they are on the edge of a precipice because of the great difficulty navigating the new trading rules negotiated by the Government.”

“From strength to stength”

The ads contain interviews with the owners of three firms which according to the government are “going from strength to strength” under the new terms of the UK’s trade with the EU.

When the story came to light last month James O’Brien Tweeted: “If there were even a scintilla of truth behind stories that businesses are ‘flourishing’ because of Brexit, they wouldn’t need to pay the Mail or the Express to print them.”

Indeed most of the non-sponsored stories suggest the contrary.

Last week it was reported that a plant supplier in Ireland had to send goods to Wales on a 1,400 mile detour to avoid mayhem at Holyhead port.

The 170-mile journey between Neil Alcock’s Seiont Nurseries in Caernarfon and Kilkenny used to take just 12 hours before the short crossing to Dublin became entangled in red tape.

Articles in the Mail, Metro & Sun paid for by government quote three businesses who say trade has gone smoothly since Jan 1st

They "great disrespect the many businesses who feel they are on the edge of a precipice," say Labour in a letter to David Frost https://t.co/qzi25CYxwl pic.twitter.com/vAC17UDto7

“It will all figure itself out”

But in the government-sponsored articles hand-picked firms are quoted as saying the process is all going smoothly.

In one article, Anthony Pickering, owner of Owner of Techniques, says while “there are some delays” to trade, he believes “it will all figure itself out” and that his “commitment to Europe has actually strengthened”.

Alison Wood, who co-founded Lilypads, says: “It has been a few months of growth and change for us – but other than that, things are looking just fine”.

Labour said the cases failed to reflect the disruption facing thousands of businesses across a range of industries whose trade with the EU is being hampered by taxing new paperwork.

“These [adverts] claim that ‘British business is going from strength to strength under the new trade rules’ and that companies are keen to build on the success of trading with Europe’ – which, while recognising the deep resilience and perseverance of our brilliant British businesses, ignores the alarm bells they have been sounding about a lack of government support on these matters,” the letter to Frost said.