The newly-appointed chancellor is expected to increase taxes and cut public spending in moves that are unlikely to sate either side of the party. 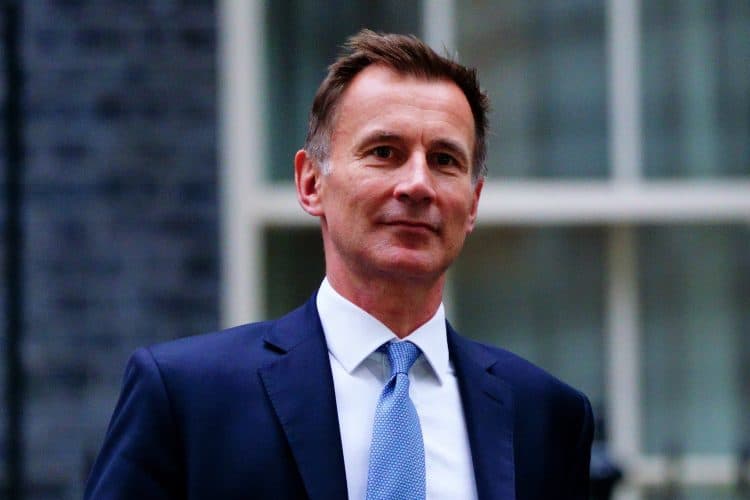 Chancellor Jeremy Hunt will set out billions of pounds of savings to stabilise the public finances in an emergency statement on Monday.

Following his statement, the Chancellor will address the House of Commons later on Monday ahead of the publication of his full medium term fiscal plan on October 31.

Taxes to go up

The move will be seen as an attempt to reassure the financial markets after weeks of turmoil in the wake of former chancellor Kwasi Kwarteng’s £45 billion mini-budget tax giveaway.

Instead, he warned that taxes would have to go up while spending would rise less quickly than had previously been planned.

Among the measures announced by Mr Kwarteng expected to be ditched are his promise to bring forward a 1p cut in the basic rate of income tax to April.

The measures come as Ms Truss continues to fight to hold on to her leadership, with three Conservative MPs already breaking ranks to call on her to go.

Crispin Blunt, Andrew Bridgen and Jamie Wallis all called on the Prime Minister to quit on Sunday, while other senior figures within the parliamentary party expressed deep unease with Ms Truss’s leadership but stopped short of calling for her to go.

Mr Blunt was the first MP to demand her exit, telling Channel 4’s Andrew Neil Show on Sunday: “I think the game is up and it’s now a question as to how the succession is managed.”

It came at the end of another extraordinary weekend in British politics, that even saw US President Joe Biden intervene to call Ms Truss’s economic vision a “mistake”.

Mr Hunt, who carried out something of a media blitz on behalf of the Prime Minister over the weekend, insisted that she was still in charge even as he diagnosed the need for a tough package of tax rises and spending cuts in order to steady the UK economy.

Penny Mordaunt also offered the Prime Minister her full support, using a piece in the Telegraph to warn that the UK “needs stability, not a soap opera”.

She told colleagues that the “national mission” is clear but said it “needs pragmatism and teamwork”.

“It needs us to work with the Prime Minister and her new Chancellor. It needs all of us.”

Meanwhile, former transport secretary Grant Shapps – who has reportedly been floated as a potential successor to the Prime Minister – wrote in The Times that the party needed to “bin the infighting and ideology” but did not explicitly back Ms Truss.

“We as a party have two years to get ourselves out of this hole, and it’s a deep hole when it comes to public confidence,” he said.

“But we have a couple of things on our side. Despite the factionalism in the run-up to and aftermath of Brexit, our MPs are overwhelmingly predisposed to supporting a competent leader.”

Mr Hunt told the BBC’s Sunday With Laura Kuenssberg programme that Ms Truss remains “in charge” and insisted voters can still put their faith in her.

“She’s listened. She’s changed. She’s been willing to do that most difficult thing in politics, which is to change tack,” he said.

The presence of Mr Hunt was welcomed by many MPs, but many senior figures admitted it was an open question whether the Prime Minister could still survive the current crisis.

Tory MP Robert Halfon, chairman of the Commons Education Committee, appeared on Sky News and declined to deny that MPs are considering installing a new leader.

“We’re all talking to see what can be done about it.”

“Over the past few weeks, the Government has looked like libertarian jihadists and treated the whole country as kind of laboratory mice,” he said.

Senior Conservative Alicia Kearns also told Times Radio that the question of whether Ms Truss should continue in charge is “incredibly difficult”.

And writing in the Telegraph, former minister Liam Fox called the current situation the “deepest political hole that we have experienced in a generation”.

Stuart Rose, a Tory peer and the Chair of Asda, told the Financial Times the Prime Minister was a “busted flush”.

Labour added to that pressure, with Sir Keir Starmer calling on the Prime Minister to appear before the Commons on Monday.

The Labour leader quipped that Ms Truss is now “in office but not in power”.

It comes as a new poll, first published in the Guardian, predicted a landslide for Labour and wipe-out for the Tories.

The poll, by Opinium for the Trades Union Congress and using the MRP method to estimate constituency-level results, put Labour on 411 seats compared to the Tories on 137.

In a sign of how divided the party is, former culture secretary Nadine Dorries hit out at her party colleagues.

“I cannot imagine there’s one G7 country which thinks we’re worthy of a place at the table.

“The removal of one electorally successful PM, the disgraceful plotting to remove another by those who didn’t get their way first time round is destabilising our economy and our reputation,” she tweeted.