Hopes of getting the deal done this year have also been dashed, with Downing Street saying they "don't want to sacrifice quality for speed". 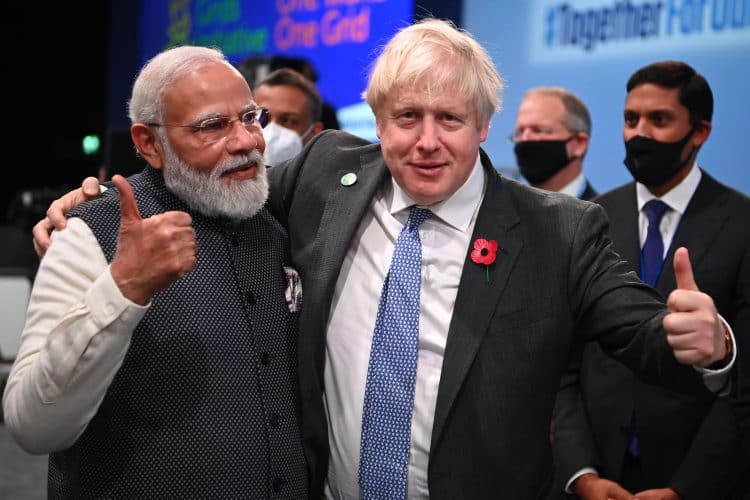 Boris Johnson has indicated that a post-Brexit trade deal with India will include accepting Delhi’s demands for an increase in migration to the UK.

The Prime Minister said he was hopeful that a free trade agreement (FTA) can be struck by the end of the year, as he headed to India for talks with his counterpart Narendra Modi.

Mr Johnson vowed to press for a reduction of fossil fuels from Vladimir Putin’s Russia, amid concerns Mr Modi has not been critical enough of the invasion of Ukraine.

The two-day trip was coming amid the fallout from Mr Johnson being fined for breaching coronavirus laws with a gathering for his 56th birthday in 2020.

While he is out of the country, MPs will vote on Thursday on whether to open a Commons investigation into whether he lied to Parliament.

Downing Street had not expressed confidence that a trade deal with India would be brokered this year, saying “we don’t want to sacrifice quality for speed”.

But, in an interview with journalists flying with him to Gujarat, Mr Johnson said: “We’re aiming to get an FTA by the end of the year.

“On immigration I’ve always been in favour of talented people coming to this country. We have a massive shortage in the UK, not least in IT, in programmers, we’re short to the tune of hundreds of thousands in our economy.

“We need to have a progressive approach, and we will. But it’s got to be controlled.”

The Prime Minister’s official spokesman said the deal needs to be “fair” and “reciprocal” while being consistent with the points-based immigration system launched after departure from the EU.

Mr Johnson vowed to bring up human rights concerns with Mr Modi, who is accused of damaging India’s democracy and of whipping up anti-Muslim sentiment.

“I will of course bring up all the issues between us in the way that friends and partners do,” Mr Johnson said.

He also said he would raise concerns that India is becoming increasingly reliant on Moscow’s fuel.

“I will make the argument that everybody needs to move away from dependence on Putin’s hydrocarbons,” Mr Johnson said.

Mr Johnson was determined to push on with the trip despite the Commons vote and slowly increasing calls from his own Tory MPs for his resignation.

His plans to visit have twice been cancelled, first over the UK’s winter wave of Covid infections and then in April last year in response to a new variant hitting India.