"Lovely to see millions of years of human evolution culminate in an MP exercising his democratic right to protest by threatening to walk around for a bit with some milk." 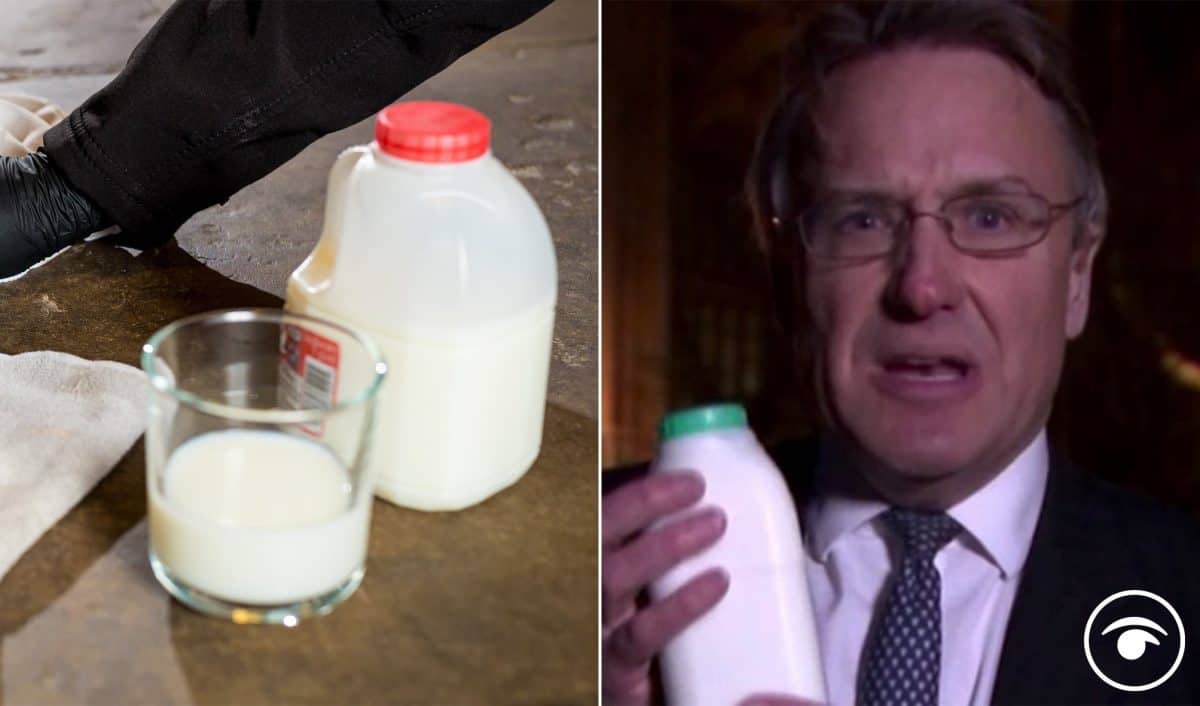 Literally nothing surprises me anymore in the world of politics.

Yesterday’s flag issue seemed to be peak (on this particular) Thursday insanity. But no hold my pint, of milk, as Charles Walker took the prize for the craziest statement of the day.

The Prime Minister had ordered his MPs to support an extension to wide-ranging powers contained in the Coronavirus Act.

But several ignored this and opted to vote against, including former cabinet ministers David Davis and Esther McVey.

Despite the protests of backbench Tories, MPs voted to extend emergency Covid-19 powers until the end of September, far beyond the planned end of social distancing in June.

Prior to the vote, Sir Walker made a bizarre pledge to “protest about the price of milk” and told the Commons he would spend the next few days walking around London “with a pint of milk on my person because that pint will represent my protest”.

He told the House “that pint will remind me that the act of protest is a freedom & not a right… & if you don’t fight for freedoms they end up being taken away from you.”

Charles Walker is going to allow himself an act of defiance, & he's going to walk around London with a pint of milk on his person, because that pint will represent his protest… pic.twitter.com/NWtynJ7UMQ

The fact that this isn’t satire should be enough, but people had a lot to say about his sour protest.

I look forward to the future dramatisation of this protest as a West End musical: LES MILKERABLES. https://t.co/OgEI5XakbF

Lovely to see millions of years of human evolution culminate in an MP exercising his democratic right to protest by threatening to walk around for a bit with some milk.

This is really happening…MP Charles Walker tells colleagues he is going to walk around London with a pint of milk as a protest over the coronavirus restrictions. He encourages others to do the same, perhaps those who fear the slide into authoritarianism.

If he was a real Conservative he'd snatch that milk off a kid first. https://t.co/9jYVYLnOV4

This is like something you'd read someone did in 1832.

"I shall walk around London with a pint of milk, sir! And thereafter I will boil mine own shoe!" https://t.co/pzqpccUZee

This is not the most stupid thing a Tory has said in Parliament in the last few months. https://t.co/ILK9yDUpBp

I don’t suppose it needs to be said that the freedom to carry a pint of milk is not under threat and this is full on pencils-up-the-nostrils madness but what ho I’ve said it anyway. https://t.co/Y59dzYtRJv

I keep thinking of jokes to make, but, really, just saying "HAHAHAHAHAHA" is the only viable response. Milk vs corona. Jesus Christ. https://t.co/yl3tQXZVea

2.30pm: Conservative MP Sir Charles Walker tells the Commons he is going to walk around London with a pint of milk as a protest over the coronavirus restrictions and encourages others to do the same.
7pm: pic.twitter.com/b3ks92xjeo

The Tory MP Charles Walker who plans to walk around London with a pint of milk as a protest over the coronavirus restrictions – also says he's not having the jab because 'he's afraid of needles.'

So his stupid protest will not only put his life but others lives at risk too.

Sir Charles Walker explains why he will carry a bottle of milk everywhere.*
*spoiler alert: it's because he's off his fucking chump. pic.twitter.com/7AUeFwwTjY

So Conservative MP Charles Walker's big "act of defiance" against the UK's "slide into authoritarianism" will be to walk around London with a pint of milk. pic.twitter.com/3cNaALSH1o

There is Alan Bennett-level poignancy to the Charles Walker milk speech. It fits into a great comic-melancholy tradition. Hints of Reggie Perrin, or Richard Briars in Ever Decreasing Circles. Best* theatre I have seen all year.

Desmond Swayne: "I am a complete idiot".
Charles Walker: "Hold my pint of milk".
#C4News