The school closed at the last minute this morning due to a second day of protests. 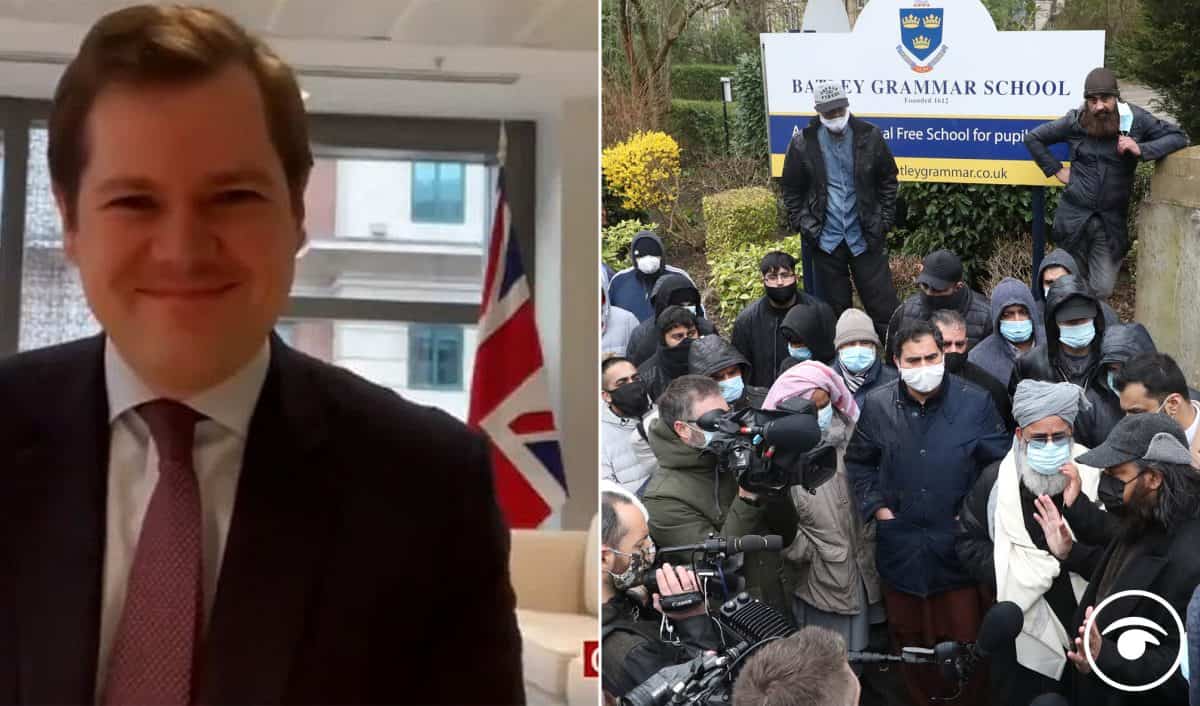 Protests taking place outside a school, where a teacher was suspended for showing pupils a caricature of the Prophet Mohammed, were “not right”, the Communities Secretary said.

Robert Jenrick also said suggestions that a teacher at Batley Grammar School in Batley, near Bradford, West Yorkshire, was in hiding were “very disturbing”.

His comments came as protesters gathered outside for a second day on Friday, with police also at the scene.

The school’s headteacher Garry Kibble took the decision to put students on online studies after more than 50 protesters turned up at the school gates.

Meanwhile, the Muslim Association of Britain told the Times: “It is well documented that Islamophobic rhetoric is on the rise and the use of pictures of Prophet Mohammed is deeply offensive to Muslims.

“We trust that the school will investigate and take the appropriate action needed.”

A teacher, said to be in his late twenties, has since been suspended and is now believed to be in hiding after he was identified online, report the Evening Standard.

It follows claims a member of staff had shown students a cartoon, widely reported as taken from the French satirical newspaper Charlie Hebdo, deemed offensive to the Islamic faith during a religious studies lesson this week.

Speaking to Sky News, Mr Jenrick said: “I was disturbed to see scenes of people protesting outside the school – that is not right.

“We shouldn’t have teachers, members of staff of schools feeling intimidated, and the reports that a teacher may even be in hiding is very disturbing.

“That is not a road we want to go down in this country, so I would strongly urge people who are concerned about this issue not to do that.”

On Thursday, the school “unequivocally” apologised for showing “totally inappropriate” material to children, and said a member of staff was suspended pending an investigation.

A protester speaking “on behalf of the Muslim community” read out a statement outside of the school on Friday, in which he said: “The teachers have breached the position of trust and failed their duty of safeguarding, and this issue must be addressed as a matter of urgency.

“We do not accept that the school has taken this issue seriously, given that it’s taken them four days to merely suspend only one of the teachers involved.”

He called on the entire British Muslim community to review the materials being taught in their children’s schools.

One protester whose children attend the school, who only wanted to be identified as Mr Hussain, told the PA news agency: “What people are trying to convey here to the media and to the British public at large is we would not like any form of extremism, any extremist viewpoints, to be taught to children.”

He said the western world “is at a loss in understanding the reaction” from the Muslim community when the Prophet Mohammed is “insulted in any way, shape of form”.

Mr Jenrick said the Department for Education (DfE) is working with the school and local council as it investigates the incident.

“What I can say is there has to be an appropriate balance – we have to ensure there is free speech, that teachers can teach uninhabited but that has to be done in a respectful and tolerant way and that’s a balance to be struck by teaching professionals and the schools concerned,” Mr Jenrick said.

Baroness Warsi, former chairwoman of the Conservative party, said the incident has been “hijacked by extremists on both sides” to create a culture war.

Speaking to the Today programme, the peer said she had spoken to pupils and parents over the past 24 hours, and “it’s obvious that many pupils were left distressed because of what happened”.

She said: “What we’re forgetting in all of this is the most important party in all of this, which is the kids and their learning.”

The DfE came under fire for amplifying divisions after it branded the protests “completely unacceptable”, and said they included “threats” and “intimidation”.

Mohammed Shafiq, chief executive of Manchester-based Ramadhan Foundation, said: “It is alarming that the Department for Education chose to amplify those divisions by attacking the parents and pupils rather than looking how we can come together to have a respectful discussion and seek an end to this issue.”