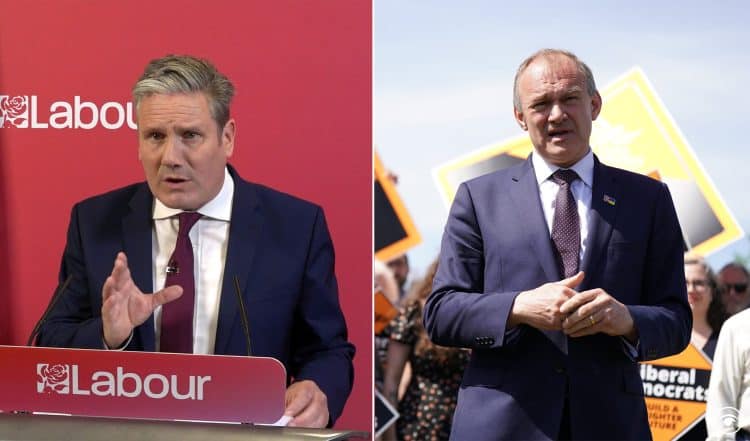 Rumours that Labour and the Liberal Democrats could have entered into a secret electoral pact have been circulating in the run-up to two key by-elections next week.

According to Telegraph reports, Labour’s entire shadow cabinet has been missing in action in Tiverton and Honiton during the by-election campaign.

Not a single member of Sir Keir Starmer’s frontbench has visited the Devon constituency or referred to it in campaigning.

That is despite the party coming second there in 2019 and beating the Liberal Democrats.

Meanwhile, in Wakefield, Sir Ed Davey, the party’s leader, has yet to make an appearance, despite launching his party’s campaign in Tiverton and Honiton on May 20th.

Data from Facebook’s Ad Library shows the Lib Dems have targeted six digital advertising campaigns at Tiverton and Honiton voters, but none in Wakefield.

Labour, conversely, ran a paid Facebook survey for Wakefield residents between May 10th and May 19th, but has not run any online adverts in Tiverton and Honiton.

Furthermore, the Liberal Democrats have set up a separate website to promote Richard Foord, its Tiverton and Honiton candidate, but have not done the same for Jamie Needle, who is standing for them in Wakefield.

It has fueled rumours within the Conservative Party that the parties have entered into a “grubby backroom deal”.

Asked in May whether any arrangements had been made with Labour to help secure either contest, Sir Ed Davey told the PA news agency: “There are no pacts or no deals now or in future.

“We have a great legacy in the West Country. We’ve just won control of Somerset Council from the Conservatives.