The Labour leader was in talks to take up a consultancy job with law firm Mishcon de Reya in 2017. 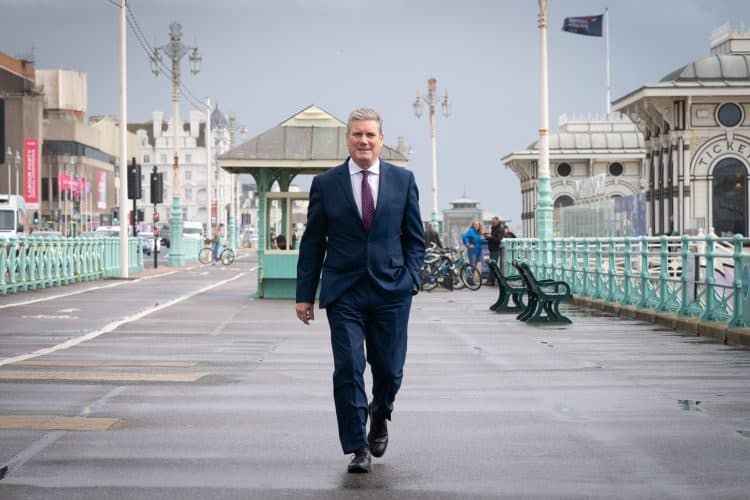 Keir Starmer is being urged not to ditch a longstanding promise to ban MPs from having second jobs, amid concerns that the Labour leader has ditched the policy.

The party had previously pledged to restrict MPs taking outside employment, in an effort to clean up politics and prevent sleaze affairs like the Owen Paterson scandal.

But Sir Keir has appeared to water down the promise this week, arguing instead for a more limited second jobs ban on those holding “ministerial office”.

The broader pledge – first proposed by Ed Miliband and expanded on in Jeremy Corbyn’s 2019 manifesto – was not mentioned by Labour frontbenchers this week, even as the Tory lobbying scandal engulfs Westminster.

And, in an excruciating interview on Monday night, Starmer was repeatedly challenged by Sky News over reports he considered taking a second job while serving on Corbyn’s frontbench.

In 2017, The Times reported that Starmer – then the shadow Brexit secretary – was offered a job by Mishcon de Reya, the law firm behind a court case which forced Theresa May to give parliament a vote on Article 50.

Starmer was accused by Conservative MPs of a “conflict of interest” over the job – which he had been expected to accept before the intervention of Corbyn who had, two years earlier, voted to ban MPs from holding second jobs.

Sir Keir, a former director of public prosecutions, worked for Mishcon de Reya before becoming an MP in 2015. The role would have seen him advising the firm’s internal think tank, and would not have been client-facing.

The newspaper reported that Starmer held a similar role a year earlier, earning £4,500 for legal advice provided to the firm between 1 June and 30 September.

Payments ceased when he was appointed shadow Brexit secretary in October 2016, although he did receive £3,200 for legal advice to another firm – Simons Muirhead and Burton – the following month.

Asked about his potential role with Mishcon de Reya on Sky News on Monday night, Starmer said he was “in discussion” with the firm – but “nothing happened”.

He added: “I have given up my practicing certificate, I can no longer act as a lawyer. I have two jobs – one is to represent the people of Holborn and St Pancras, my constituency, and the other is to bring down this awful government.

“I have given written pieces of legal advice since becoming an MP, but I have now given up my legal certificate – I gave it up the best part of two years ago. That means I am no longer qualified to give legal advice.

“My job is to represent those people in Holborn and St Pancras and to bring down this awful government.”